St Vincent and the Grenadines Prime Minister Dr Ralph Gonsalves has offered to rename a village on his island after Kamla Persad-Bissessar if the Trinidad and Tobago Prime Minister aids the relocation of a significant portion of the 250 residents in its South Windward constituency.

The Vincentian PM said the restoration of his battered constituency would cost almost a billion dollars (TT). Is that all?

Like a flirtatious date, Gonzalves did not say what the taxpayers’ dollars already poured into St Vincent had gotten the two island republic. But if T&T would only throw a couple million more on the table, then who knows…

“I would like to see the Prime Minister of Trinidad and Tobago help us,” Gonsalves told the Trinidad Guardian. “If they help us in relocating a certain number of people, I see no problem in calling it Kamla Village in appreciation.”

One assumes that the people of St Vincent have as much say in the sale of their village’s name as the people of Trinidad and Tobago are likely to have in the acquiring of it.

Live Wire cannot confirm that La Brea villagers have countered by offering to name their first born child “Kamla” if the People’s Partnership can look after their health and housing needs until Petrotrin finishes clean up the massive oil spill in its waters. Or that Debe residents will name their rest rooms “PP” if the Government re-routes its controversial highway.

Or that political grasshopper Robin Montano is putting the naming rights of his next rectal exam up for auction.

Mr. Live Wire is an avid news reader who translates media reports for persons who can handle the truth. And satire. Unlike Jack Nicholson, he rarely yells.
Previous Acting Police Commissioner flops on the switchboard; hypothetically
Next Hart promises “sensible” Warriors approach against Argentina 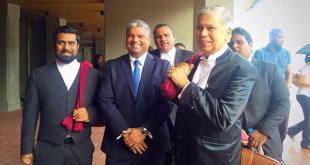