Santa Rosa scored all six of their goals in the second half at the St Margaret’s Recreation Ground in San Fernando, as they routed the Giants 6-0 with doubles from Kheelon Mitchell and Kishun Seecharan.

And QPCC got items from Sean De Silva—back from trials in South America—and new import Rashad Griffith, as they whipped Erin FC 5-1 at the Erin Recreation Ground. Former Soca Warriors attacker Sylvester Teesdale got the lone item for the host team.

Santa Rosa and QPCC are joint TTSL leaders at present with 27 points, although the former club have a superior goal difference. While, at the other end of the 14-team standings, Erin are 12th with six points while the Giants are bottom with five points.

Cunupia can join Santa Rosa and QPCC with 27 points tomorrow with a win against mid table outfit, Prisons FC, at the Larry Gomes Stadium. While there is plenty at stake in Guayaguayare where defending champions Guaya United host east coast rivals, Matura ReUnited.

Guaya and Matura are fifth and sixth respectively in the standings at present. 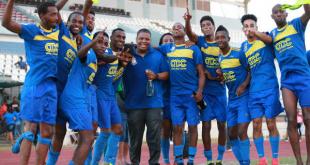 It was nervy, tense and, in the end, a totally rewarding climax to the Trinidad …