I am using the vernacular “doh look dong” instead of “do not look down” in order to keep real the dangerous nature of the predicament of the passengers transferred at sea from the water taxi Trini Flash to the larger vessel, Cabo Star.

As readers will recall the Trini Flash caught fire on the ocean while substituting on the sea bridge to Tobago proximate to the just concluded Easter weekend.

Statements of Ministers and public authorities guilefully use generic words in statements  seeking to deflect responsibility and accountability. On this occasion, the National Infrastructure Development Company Limited (NIDCO) and the Water Taxi Service (WTS), sought to assure the public that “all safety protocols were followed” and that “the transfer of the passengers was done in the most effective manner and was done successfully in 38 minutes without injury to passengers and despite adverse sea conditions.”

NIDCO and WTS gave this statement in reaction to Watson Duke’s magnification that the episode was “attempted murder.”

What NIDCO and WTS failed to do was to identify what specific safety measures were actually implemented.  What was seen on prime time news, as well as what could be more closely examined when the video went viral, provides evidence of compromise of passenger safety.

Between the two vessels there was a space, described as “an open pit” by one passenger. Persons clad in life jackets were clambering on their bellies from the deck of the Trini Flash towards the outstretched hands of persons pulling them by their forearms onto the receiving vessel, unprotected from the open pit over the deep ocean.

A passenger says she was told “doh look dong into the water.” If the video is accurate, it was a case of avoiding positional vertigo, which may occur when looking down from a height, causing dizziness and feelings of losing balance.

What would have happened if a passenger had fallen between the two vessels? Head injuries, concussions, broken limbs, even a drowning, would have been likely. A sudden pitch of either vessel in the adverse seas could easily have produced such results.

Having examined the video, one can justifiably question whether what we see there truly represents the implementation of “all safety protocols.”

Mr Duke might have been in error only as to the type of charge. If any of the clambering passengers had fallen between the two vessels and died, who knows what lawyers skilled in criminal law might have raised?

Some Ministries of Government also seem to have had their own problems of where to look.

The ship rescue situation was conducted on the basis of “doh look dong.” Around the same time, the Ministry of Sport used a legal device to prevent us looking behind the Ministry of Sport’s settlement of a case of alleged sexual harassment before the Industrial Court, even if it was a case about looking too much at the behind.

Was the device a political life vest? Would Smith’s ship sink without it?

As with the rescue at sea, words of general application were also the choice of the Foreign Affairs Ministry to explain why we tried to sink Dominica at the Organization of American States. There, our ambassador voted against a waiver of hurricane stricken Dominica’s subscriptions to that organization. The ambassador said “don’t look down at me. I followed instructions.”

More looking problems ensued, because the Foreign Affairs Ministry seemed to wish to evade looking at and owning up to the instructions it gave to the ambassador. It  preferred to say in a vacuum that the vote is “not aligned with the actions, policy or orientation of Trinidad and Tobago to Dominica”—using generic words shamelessly to imply that it was the ambassador who got it wrong and ultimately making the Minister look questionable.

When Alice of Alice in Wonderland stepped through the looking glass to see the world on the other side of her reflection, she found a nonsense poem called Jabberwocky, full of odd characters like the burbling Jabberwock, the Jubjub Bird and the Bandersnatch.

Have these characters jumped from the fantasy world into the Ministries and their satellites and settled there, writing nonsense and deploying dishonourable devices?

Martin G Daly SC is a prominent attorney-at-law. He is a former Independent Senator and past president of the Law Association of Trinidad and Tobago. He is chairman of the Pat Bishop Foundation and a steelpan music enthusiast.
Previous Monitoring Me 2: Sport as nirvana; Football’s Lord, Cricket’s Prince and the Calypso King of the World
Next T&T sports lawyer, Emir Crowne, snapped up by London-based Sport Resolutions panel 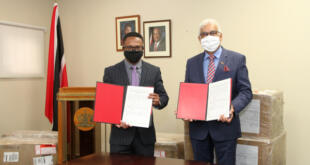