Chaguanas West MP Jack Warner says he has evidence of corruption in the multi-billion dollar Point Fortin Highway construction. And a corrupt MP might be involved.

Warner refused to divulge more details and told the Trinidad Express that he will say more “in the fullness of time.”

“As the time progresses,” said Warner, “I will decide what to do with the evidence I have.”

Warner did not say if the revelation of those details was dependent on whether or not a deal could be struck with him by the guilty parties. Or if he was withholding information on a crime until it was politically expedient for him to do the civic minded thing; and the rape of the public purse was just a bargaining chip in his game of thrones.

Or if he was waiting to see if Subhas Panday’s “Anti-White Collar Crime Authority” plan will be accepted and he could then pocket the “Good Samaritan kickback” of 33.3 percent of the value of the corrupt act.

Warner said the evidence he received of corruption: “has boggled my mind.”

“I am amazed at the level of corruption for which I have evidence,” he said.

Mr Live Wire is surprised by his amazement. Warner has probably known one of the most corrupt official in the country for quite some time; and probably sees him a few times a day too, particularly when he is brushing his teeth.

Mr. Live Wire is an avid news reader who translates media reports for persons who can handle the truth. And satire. Unlike Jack Nicholson, he rarely yells.
Previous Bring in the spinners: Pennelope says communication is PNM’s problem
Next Benjamin scores but Connection whipped in Panama 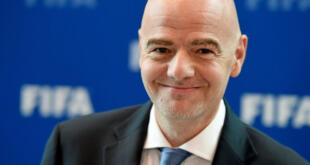 Noble: Can Fifa be tamed? Collaborations—not the courts—offer the best shot

In the furore about local football and the appointment of a normalisation committee by Fifa, …