Tall, talented Trinidad and Tobago international striker Jamal Gay scored the lone goal with a header in the 28th minute that moved Caledonia a step closer towards the group stage of the CONCACAF competition.

This victory means the “Eastern Stallions” tentatively have one foot CONCACAF champions league, as they seek to end their season on a high after clinching the FCB Cup, TTFF FA Trophy and finishing second in the Digicel Pro League.

In front of a small but vocal crowd, energised by two rhythm sections in the covered stands, Caledonia was the more threatening team and should have widened their lead while Portmore also squandered decent build-ups with erratic shooting.

Caledonia might have scored twice within the first 10 minutes.

First, Gay headed tamely into the gloves of Portmore goalkeeper Kemar Foster off a well-weighted Akim Armstrong cross before Foster was quick off his goalline to deny Lewis in a one-on-one contest.

The youthful Portmore team, which included five Jamaica national under-23 players, responded in the 17th minute. Bryan Bayliss got a cross past Caledonia defender Nuru Muhammad and Paul Wilson’s controlled volley was parried away by goalkeeper Glenroy Samuel.

A turnover from Armstrong on the break lost the ball again saw the ball relayed to Wilson. But, this time, he missed the target.

The Stallions made Portmore pay for that miss.

Former Joe Public and W Connection attacker Andre Toussaint, who made his Caledonia debut yesterday, found space down the right flank and crossed for Gay to head the host team into the lead.

Caledonia controlled the tempo thereafter with the midfield pairing of Densill Theobald and captain Stephan David in good form.

But Portmore did conjure a good chance in the second half when Sue Lae McCalla headed a Trevol Smith cross goalwards only for the Caledonia goalkeeper to push it away.

Gay, who had a quality all-round game, produced arguably the best individual moment of match in the 70th minute. He chased a long pass to the corner flag and, with seemingly nowhere to go, brilliantly evaded two Portmore defenders to manufacture a cross that caught the keeper off-guard but just beat the lunging Toussaint.

Neither team came any closer to a goal.

Caledonia, led by coach Jamaal Shabazz, will expect more lethal finishing in the second leg against Portmore tomorrow evening at the Ato Bolton Stadium in Couva. 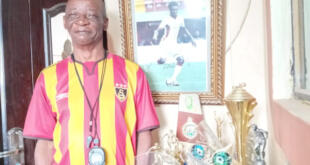 ‘Parents keep bringing their children, so it’s hard to stop!’ Day in the life of a youth coach