Trinidad and Tobago Super League (TTSL) outfit San Fernando Giants have asked for another 24 hours to consider their position on president Keith Look Loy’s role on the Trinidad and Tobago Football Association’s board of directors.

And, with Guaya United owner Randy Hagley’s petition for Look Loy’s removal down from 15 clubs to 11, Giants’ decision could have a telling impact on not just the TTSL but local football on a whole.

Hagley needs 12 votes from the TTSL’s 22 member clubs to force an unprecedented special general meeting to rule on whether their president should be taken off the TTFA board—a decision that could impact on Look Loy’s probing of association president David John-Williams’ controversial Home of Football project.

At present, the Guaya-led motion appears short of one backer, although both parties disagree on the count.

“I am writing to officially rescind WASA FC’s support for the petition to convene an EGM for the removal of president Keith Look Loy as the TTSL Representative on the TTFA Board of Directors with immediate effect,” stated WASA official Lennon Jones. “WASA FC is of the opinion that: the actions initiated by the TTSL President regarding transparency of the Home of Football project and the governing body should be allowed to be completed; and the impending merger of the Pro League and Super League into one national league with two divisions must be our main focus at the moment…”

Hagley told Wired868 today that Gordon changed his mind yet again and was once more supporting the call for Look Loy’s removal from the TTFA board. However, Gordon denied that.

“No, I am not supporting that petition,” the Erin representative told Wired868 tonight.

At present, the 11 clubs in support of Hagley’s petition are: Guaya United, Cunupia FC, Matura Re-United, Petit Valley/Diego Martin United, Defence Force, Harlem Strikers, Marabella FCC, Siparia Spurs, Youth Stars, Central 500 and 1976 Phoenix FC. Only four of those teams competed in the 2018 TTSL competition while the rest missed out due to their failure to meet a registration deadline.

Hagley cannot tally the support of Central Football Association (CFA) team, Perseverance United, who also signed the petition but are not deemed to be a TTSL team.

Last year, Perseverance United were one of four teams—alongside Erin, Beatnix and San Fernando Giants—given provisional membership to the TTSL on 7 April. However the club, which earned promotion through the Champion of Champions tournament, could not raise their TT$45,000 registration fee in time.

Still, Perseverance United could have preserved their place in the second tier competition by paying a TT$1,000 subscription fee. But they failed to do that too, after what club officials claimed to be a mix-up caused by a conversation with TTSL general secretary Peter Thomas.

“Here is the ticklish thing; when we first learnt we had to pay the subscription I spoke to Mr Thomas on two occasions,” said team manager Allan Logan, “and he said they were having a subsequent meeting to decide on membership and to hold off paying. I called two months later and he said the meeting never took place.

“[…] After [last month’s visit of the] UEFA officials, we were considering rejoining and wanted to be a part of the meeting [today] only to hear we were not members because we are not in financial standing. We feel we were disenfranchised.”

Curtis Agard, another official at the club—which has since undergone a name change to Real Central FC—admitted that they received word of their expulsion since last September.

“We qualified to be in the Super League and we tried to pay our fees. Yesterday the general secretary sent us an email saying we were uninvited [to today’s EGM] and that our email address had been included in error.

San Fernando Giants were the only club accepted into the TTSL without even qualifying for the Champion of Champions tournament last year. As teams struggled to meet the registration deadline, the Giants were able to get their finances together and were allowed into the TTSL to help make up numbers.

Giants president Anthony ‘Cla Tones’ Clarke is a vocal supporter of the TTFA president and was part of a hand-picked Home of Football committee which met UEFA officials last week—despite not being sanctioned by the TTFA board.

Clarke has a problem with Look Loy’s public tussles with John-Williams.

“[…] He is taking a personal position where he is representing a body. He cannot say that on behalf of all the clubs of the TTSL; he must speak to the club members.

“Is this the proper man to represent us seeing that he has this agenda?”

Ironically, Giants ruled that Clarke himself had spoken out of turn by supporting Hagley’s petition without running it past their board first.

On Thursday, Clarke assured Wired868 that his Giants colleagues would soon see things his way after a board meeting that night. However, that did not happen.

“We have not made a decision as yet,” said Giants PRO Curtis Emmanuel. “That is still in discussion with the board of the San Fernando Giants.”

Clarke will have another chance to win over his board within the next 24 hours. If he fails to do so, Hagley’s petition will be dead. (Although, even with the Giants’ support, questions over the status of the non-compliant trio of Siparia Spurs, Youth Stars and Central 500 could also a problem for the faction seeking to rein in the TTSL president.)

Ironically, the seemingly robust nature of the board at tiny San Fernando Giants could potentially create a headache for the less collective management style of the current TTFA president.

Lasana Liburd is the managing director and chief editor at Wired868.com and a journalist with over 20 years experience at several Trinidad and Tobago and international publications including Play the Game, World Soccer, UK Guardian and the Trinidad Express.
@lasanaliburd
Previous Dear Editor: Venezuela crisis heightens need for education overhaul, so we can understand our place
Next Daly Bread: An extra piece of sugar cake; good vibes amidst the sleaze 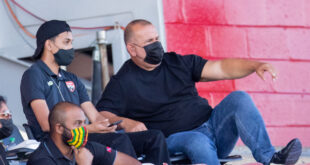 “[…] Questions linger. Others arise… The NC has never explained where the money to pay …