“In an article published on Wired868 on 15 December, Dr Claudius Fergus responded to Dool Hanomansingh, rightly accusing him of ‘gross historical distortions’ and asserting that ‘He is obviously not a historian. If not for the danger that his fiction might be taken as historical fact, I would not even dignify it with a response.’ Then, in his own article, Fergus, who lectures in history at The UWI, proceeded to commit exactly the same transgressions (…).”

The following Letter to the Editor, which is a response to a letter published on this site earlier this month, was submitted to Wired868 by Kevin Baldeosingh:

It’s always amusing to watch ideologues argue about who is more racist.

In an article published on Wired868 on 15 December, Dr Claudius Fergus responded to Dool Hanomansingh, rightly accusing him of “gross historical distortions” and asserting that “He is obviously not a historian. If not for the danger that his fiction might be taken as historical fact, I would not even dignify it with a response.” Then, in his own article, Fergus, who lectures in history at The UWI, proceeded to commit exactly the same transgressions although his falsehoods are more egregious since he is an academic.

For example, Fergus writes that, “According to England’s highly respected egyptologist Wallis Budge, Ethiopia was a region extending from Kush in Africa to the Indus River in India; Budge reminds us that ancient Greek geographers ‘regarded all the dark-skinned and black peoples that inhabit it as Ethiopians.’”

Budge died in 1934. And Professor of Classical History Frank M Snowden notes that it is erroneous to assume that the term ‘Afri’ (from which the continental name “Africa” is derived) used by Greeks is always synonymous with the modern terminology of words like “Negro” or “black.”

“Greeks and Romans differentiated clearly between the various gradations in the colour of dark-skinned Mediterraneans and used several adjectives—e.g. melas and niger (black and dark), fuscus (dark but lighter than niger)—to describe people darker than themselves,” Snowden writes. “Not all people described by such colour terms were blacks or Negroes in the modern sense, but only the inhabitants of the Nile valley south of Egypt and of the southern fringes of north-western Africa.”

Fergus then asserts the standard Afrocentrist/Islamist canard that “Arabs did not ‘forcibly’ convert Africans south of the Sahara. Indeed, Africans were partners in the construction of Islam.”

Arabs did not ‘forcibly’ convert Africans south of the Sahara. Indeed, Africans were partners in the construction of Islam… It is well documented that Prophet Muhammad sent his closest relatives to Ethiopia for refuge during the Medina-Mecca war, including two of his future wives, a daughter and a son-in-law.”

This is at best a half-truth. The eminent Near Eastern historian Bernard Lewis writes that “the good reputation of the Ethiopians was further increased by the kindly welcome afforded to Muslim refugees from Mecca” but that “After the conquests, however, there were changes. Advancing on the one hand into Africa and on the other into southwest Asia the Arabs encountered fairer-skinned people who were more advanced and darker-skinned people who were more primitive. No doubt as a result of this, they began to equate the two facts.”

This period also saw the “massive development of the slave trade in black Africa.”

The historian John Parker writes: “By the end of the first millennium, camel-riding Berber and Arab traders had begun to forge links across the Sahara with what they called the bilad al-Sudan, the ‘lands of the blacks.’ With trade came Islam itself, attracting converts from amongst the commercial and the ruling elites of West Africa’s savanna kingdoms.”

Historian Adam J Silverstein notes that “the Arabs arrived in the Near East and North in the mid-to-late 7th Century and stayed there, creating garrison towns in North Africa, Egypt, Iraq, and eastern Iran – only in Syria did the conquerors settle in existing towns.” Why the need for fortress settlements if Islam was spread peaceably?

But Fergus’ most revealing assertion is that “The great Karl Marx, for example, declared the Haitian Revolution ‘the most significant victory toward the advancement of universal freedom.’ Without excluding the contribution of every ethnic constituency, the fact remains that, in the 20th century, African peoples maintained that leadership role.”

CLR James in The Black Jacobins records that in 1805, “the whites in Haiti were massacred by the orders of Dessalines,” immediately followed by the justificatory “All histories are full of this.” Fergus’ adjective ‘great’ suggests that he supports Marxist ideology. But Communism itself directly and indirectly was responsible for the deaths of about 70 million people.

Any historian who elides that fact while claiming to stand for a moral cause is being at the very least intellectually dishonest.

Want to share your thoughts with Wired868? Email us at editor@wired868.com. Please keep your letter between 300 to 600 words and be sure to read it over first for typos and punctuation. We don't publish anonymously unless there is a good reason, such as an obvious threat of harassment or job loss.
Previous Day in the Life of a judge: Giving everyone 100 percent
Next Day in the Life of a farmer: Seasoned greetings from the hills of Paramin 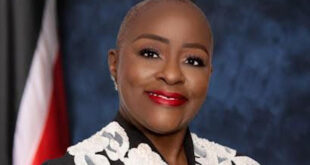 “[…] Mrs Camille Robinson-Regis, at the relevant political meeting, laid a series of charges against …