Media Monitor: NeRowley dazzles while seabridge burns but Bassant not blinded by BS

And underneath is written,
In letters all of gold,
How valiantly he kept the bridge
In the brave days of old.

The brazen attempt by Prime Minister Dr Keith Rowley to bramble the population into thinking that the bungling government is taking serious action on the ferry fiasco is doomed to fail; like the Roman hero of old, our “Horatius” stands at the bridge.

Whatever the qualifications of businessman Christian Mouttet to act as sole investigator in a matter of this moment, they are not, to quote the Express editorial of Thursday 17 September, “the credentials required for investigating a State-funded transaction that is crying out for an independent, professionally-conducted (sic) forensic audit.”

Now I do not have great faith in the local media to get things right, be it something as simple as the spelling of the Agriculture Minister’s name or something as elusive as the identity of the “Mr Big.”

And recent events have hardly helped in that regard, the medal-winning, US-stopping, eye-opening, almost eye-popping run by the 4x400m men’s relay team at the World Championships in London on Sunday afternoon having been relegated by TV6 that evening to its “proper” place at the head of the sports news.

And then there was the Tuesday Express’ shifting of the focus in its front page headline from the medal-winning athlete to the albeit selfless senator who had surrendered her superior seat. Do these people care about anything but volume of sales? Do they even know what real news is?

Ian Ramdhanie, a letter writer in Wednesday’s Express, had had this to say: “Quite often, many wrongdoings (sic) take place behind closed doors and the media have a very important role in uncovering these illegal transactions and bringing them to the public’s attention. Here, we are talking about matters that affect the general public, taxpayers, consumers, etc.”

The letter does not mention CCN’s “multimedia specialist and senior investigative reporter” by name but one suspects that he had Bassant in mind as he wrote. How could you not make the connection between last Sunday Express’ front page editorial and the persistent, painstaking work put in by Bassant?

The moment his news nose told him there might be a skeleton in the cupboard, Bassant went sniffing around, never taking—in his search for identity of the elusive owner of Bridgemans Services Group LP—no for an answer, intent on putting flesh on the bare bones he had found.

So would it be overstating the case to say that, were it not for the curiosity and the stick-to-itiveness of Bassant, we, the taxpayers of Trinidad and Tobago, might well have been forking out vast sums per day-scarce in any currency but in even scarcer US dollars-for a craft that, more expensive than its predecessor, was not even seaworthy?

Would it be to overstate the case to say that, were it not for the curiosity and the stick-to-itiveness of Bassant, Tobago would have found themselves saddled with an additional huge daily bill and a service no more reliable than it has been since the Superfast Galicia sailed out of the Scarborough harbour for the last time over three months ago?

Would it be to overstate the case to say that, were it not for the curiosity and the stick-to-itiveness of Bassant, we, the taxpayers of Trinidad and Tobago might find ourselves duped by a Prime Minister and a compliant Port Authority and Minister of Works into thinking that the worse was over, that ferry woes were now sea water under the sea bridge?

And would it be to overstate the case to say that, were it not for the curiosity and the stick-to-itiveness of Bassant, we, the taxpayers of Trinidad and Tobago, might still find ourselves with a heavy bill, albeit in indirect expenses, for an investigation which can yield no real fruit in law?

Well, perhaps Bassant does not get all the credit for that last one. On Page Four of Thursday’s Express, he has at last contrived to identify the elusive local agent for Bridgemans as “a man known as Lester Kenny,” who owns KEN Shipping Marine Services.

We cannot be far away now from discovering the identity of “Mr Bridgeman” himself.

Minister of Works Rohan Sinanan, whose name has been consistently linked on social media with Mr Bridgemans’, has vehemently denied any connection to the company.

Would the Integrity Commission, he asked rhetorically, not have intervened if he had failed to declare his interest in this company?

Will the Integrity Commission not intervene, I ask, if he has failed to declare his interest in any company, let alone Bridgemans?

Which brings us back to Mr Mouttet. I, like 99% of T&T taxpayers, am counting on Bassant to tell us if there is any truth in the claim by the UNC—see why we need a reputable source?—about the ownership of lands in the vicinity of the still-to-be-constructed Curepe Interchange.

The social media maccometer says that the ownership of properties on the north and the south of the proposed interchange should be of interest to taxpayers; Mr Mouttet says that his Prestige Holdings company is a tenant.

Are there tenants on the southern side of the proposed interchange as well? Or just owners?

And thanks for standing at the bridge for us.

Earl Best taught cricket, French, football and Spanish at QRC for many years and has written consistently for the Tapia and the Trinidad and Tobago Review since the 1970's. He is also a former sports editor at the Trinidad Guardian and the Trinidad Express and is now a senior lecturer in Journalism at COSTAATT.
Previous T&T U-15s close group with 3-0 loss to Canada; Latapy: “Good learning experience”
Next Is a tap out scene! Live Wire gets a whiff of the Ocean Flower and looks for Cabo Star’s teeth 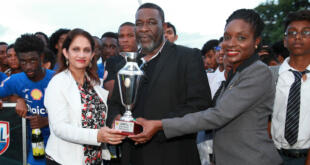 TTFA vs FIFA puzzle—Pt 2: probity, perfidy and piss-poor presumptions about vows of poverty

Why did satisfying [Terry] Fenwick and [Peter] Miller matter so much to Mr [William] Wallace? …