It was Charles’ third strike for Jabloteh since his January transfer from Stars and a welcome point for the “San Juan Kings.”

Elsewhere last evening, Point Fortin Civic FC continued their resurgence under interim boss Leroy De Leon as they came from behind to edge Defence Force 2-1 for a third successive win since Reynold Carrington left the club. While defending champions DIRECTV W Connection stayed within three points of the summit with a 2-1 triumph over Police.

At Macoya, Central and North East both began with weakened teams as the “Couva Sharks” were without suspended players Atualla Guerra and Rundell Winchester while Stars captain and goalkeeper Cleon John was on the substitutes’ bench.

Diminutive North East utility player Kennedy Hinkson had the first shy at goal in the sixth minute but his sweetly struck volley was easily corralled by Central custodian Jan-Michael Williams at his near post.

Both sides were struggling to get their passing rhythm but, when an opportunity presented itself, the league leaders were the ones to take advantage.

After some industrious play down the right flank by Kaydion Gabriel, Elton John swung a cross into the six yard box where midfielder Jason Marcano was on hand to glance past goalkeeper Stefan Berkeley. One-nil to Central after 18 minutes.

Stars tried to work their way back into the game but Hinkson and fellow attacker Keron Cummings were often frustrated in their efforts to link up.

Keryn Navarro gave Williams some work to do with a long range effort that forced the “Soca Warrior” into a fine save in the 27th minute. But Central doubled their lead soon after.

Central defender Jamal Jack should have done better with a close range header in the 33rd minute. But he did not have to ponder his miss for long before Willis Plaza struck with his sixth league goal since rejoining the club in January.

Plaza collected a Marcano pass on the half line and sprinted towards the opposing penalty area half before he buried a right-footed shot into the far corner.

Two minutes later, Gabriel did a fine Plaza impersonation before producing a similar finish in the penalty area after excellent link-up play between Plaza and his strike partner Dwight Quintero. It was 3-0 to Central at the half and the encounter was effectively over.

Stars coach Angus Eve did some chopping and changing at the start of the second half as he withdrew defenders Aquil Selby and Keithy Simpson and went from a 4-4-1-1 to a 3-1-4-2 formation.

But it might have been worse as Berkeley hauled down Quintero in the box in the 62nd minute only to redeem himself by swatting away Marvin Oliver’s spot kick.

Central was content to play on the counter attack by then and Stars, although they saw much more of the ball in the second half, never looked too ominous. Neveal Hackshaw and Dwane Jack both threatened with cracking long range efforts and the latter player forced Williams into a smart save in the 77th minute.

But North East could not break Central’s resistance and the Sharks nearly managed a fourth item as defender Uriah Bentick, like his compatriot Jamal Jack in the first half, failed to keep a close range header down.

Roneil Walcott is an avid sports fan and freelance reporter with a BA in Mass Communication from COSTAATT. Roneil is a former Harvard and St Mary's College cricketer who once had lofty aspirations of bringing joy to sport fans with the West Indies team. Now, his mission is to keep them on the edge of their seats with sharp commentary from off the playing field.
Previous What a Twit! WICB president ignites new scandal with Gayle jibe
Next Disquiet in Point Fortin as Central wins again 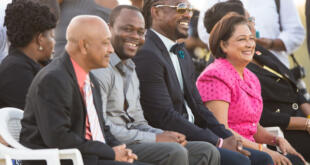 Dear editor: Will the real Brent Sancho please stand up?

“[…] Is this the same [Brent] Sancho person as the former national footballer, who took …