No Airline for Old Men: DiLollo on CAL

There is an award-winning movie called “No Country For Old Men” which still resonates with me especially since I qualified some time ago, galloping from youth into middle-age and then hobbling into senior citizenship.

While some of my friends, high on potency pills, say things like “A man is as old as the woman he feels”, I tend to feel every sports injury I ever suffered even from my earliest youth, every football knock or cricket blow and increasingly, with short breath, have become what some would call a blow-hard but in a limited sense of the word.

From the stoop of old age, looking down the timeline, one thing that strikes me is the number of names we give objects or phenomena connected with sexual organs and activities.  This is something at which Trinis excel and when I remember and reflect on my schooldays, I am amazed at how many synonyms we invented, devised or used, how many variants we adopted, just to avoid the English words “penis” and “vagina”.

“Sex-mail 101: When you send photographs of yourself in your birthday suit and the recipient does not offer to blow out the candles, chances are you not going to finish that particular race. On 6 March 2010, Australian Senator Nova Peris allegedly sent ex-Trinidad and Tobago Olympic star Ato Boldon a nude photo to show what else could be on the agenda for his trip ‘Down Under’ to help prepare that country’s athletes for the London 2012 Olympics.

“Peris, a former Olympian herself and one of Australia’s ‘most decorated indigenous athletes’, was an ambassador for Athletics Australia and a communication officer with the Australian Institute of Aboriginal & Torres Strait Islander Studies at the time. But, from photographic evidence, she had not aged as well as the Trini former track star.”

While the undecorated Senator was interesting, my wrinkle in time was not her physical condition but the headline of the article.  It was, “Ato Tea Party Down Under: Ex Olympic Star In Sex Less Scandal.”

Apart from Ato going “down under”, it was the pure Trini pun, first used publicly by Trini comedian Errol Fabien, of “Ato Tea”. It is an old brand in a new box.

One of the words we used for the male sexual organ was pronounced “toe-tea”.  While there is no proper spelling, I have seen “toti” which the “Urban Dictionary” defines as “Women’s vagina in Spanish.”  Despite the ambiguity, the idea of “Ato Tea Party down-under” is hilarious.

The word “toto” is also very common.  While “Toto” is a very successful rock-band, the word has been used in Trinidad long before I was born to describe the male sexual organ. Another word, which I have not really seen in print, is pronounced “low-lee” and a variant of it is “lollo”.  I am not sure how and from what language these evolved, but we used them in our early school days especially when we stood in line urinating together and making fun of one another’s “lollos”, “low-lees” and “toe-teas”.

It was for this reason that I, and a lot of other Trinis, found it a trifle hilarious when Caribbean Airlines hired a new CEO named “DiLollo”.  The man, from everything I’ve read, is highly qualified, extremely competent but with a name that is culturally inappropriate and will probably cause the same laughter behind his back that his appointment was greeted with when it was announced.

It is not his fault but our culture.

Then when his pay package was revealed, a friend called me and knowing my love for calypso asked, “Tony, you ever hear that calypso by Rio about men paying maintenance money? He call it ‘The Toto Tax’.”

I admitted to having it on the music flash-drive in my car.

“Well,” he continued, “when you have to pay more for travelling on Caribbean Airlines, you paying DiLollo tax.”

Viscerally, I found it funny but I knew it was not right to make fun of a man’s name especially one unused to the Trini culture.  But then I thought that the people who hired him should have known and perhaps warned their new CEO that his performance might be no problem but his name could be.

I clung to this until I had no choice but to change my departure date on a Caribbean Airlines flight to Fort Lauderdale.  The flight cost US$262 return.  The change cost US$170, plus the difference in the new fare (which was substantial).  When I considered that the price of fuel was down, I had no choice but jump to the conclusion that the CEO’s salary and allowances had to be paid and this is why Caribbean was charging more for a Barbados flight than for Fort Lauderdale and why changing a ticket costs almost as much as the ticket itself.

It was like when I first went to Barbados to live.  I bought a used “mini-Moke” for one-thousand-dollars but the insurance was fifteen hundred.  I concluded that I had to sell the car to afford the insurance.

I was stopped by BWIA’s security as I was heading to board the plane to Fort Lauderdale and the young lady in charge ran her fingers over my body, thoroughly. I thought this was not allowed but the rule seems to have been changed.

A friend who had seen what happened said, “I see the lady hands all over you.  What she thought you had – drugs?”

I took my time and answered slowly.

“No.  I think she was looking for DiLollo.”

Editor’s Note: Tony Deyal was last seen warning men who are searched by Caribbean Airlines female guards.  If you look like you’re enjoying it DiLollo and his boys will probably charge for that too. 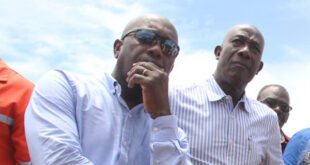 Stephen R Covey, the American author of First Things First, said: ‘We are free to …