Stars and Rangers have the league’s most sterile offensive set ups with 12 and 11 goals respectively from 13 outings before kick off. There was never going to be a goalfest and, when the dust settled, it was Kennedy Hinkson who got the game’s only goal with a 27th minute penalty.

At the other end, Stars captain Cleon John helped the Sangre Grande-based club to its seventh clean sheet of the season, which is just one short of the league high mark of eight by present leader DIRECTV W Connection.

In the second outing, Central finally broke from the shackles with a 4-1 triumph that was not quite as comfortable as the score summary might suggest.

Jabloteh pressed Central hard but could not match the quality of coach Terry Fenwick’s team as the “Couva Sharks” pulled off their first win for the year on Valentine’s Day.

Teenage winger Samuel Delice got his first top flight goal in the fifth minute as he banged home from close range after the Jabloteh defence made a mess of a deep Elton John free kick into the penalty area.

And, in first half stoppage time, Jason Marcano scored his fifth league item this term and his second in successive matches as he bravely charged into the six yard box to apply a simple finish to a low, raking Rundell Winchester cross.

There might have been some jitters in the 56th minute when new Jabloteh signing and former national youth team forward Bradley Welch brought the “San Juan Kings” back into the game with a cracking finish in the far corner after Nyron Jones picked him out on top the Central penalty area.

Jabloteh had managed a last gasp draw against Central, against the run of play, when the teams last met on 5 January 2014.

But ex-Guaya midfielder Leston Paul helped the Sharks pull clear with two telling contributions to ease the pressure on his new boss.

In the 61st minute, the Jabloteh defence half-cleared a Marcano corner kick and Paul’s firm, side-footed volley was deflected on to an upright by opposing winger Rennie Britto before Willis Plaza roofed the rebound from point blank range.

And Paul and Plaza teamed up again in the second minute of stoppage time as the diminutive midfielder danced past three opponents and teed up Plaza for a composed finish past Jabloteh goalkeeper Shane Mattis.

Central stayed in sixth place despite yesterday’s win. However, a win over Defence Force from 6 pm next Tuesday at the Ato Boldon Stadium can see the Sharks jump to anywhere from fourth to second according to results today.

Defence Force, the defending Pro League champion, will make its first league outing next Tuesday since a 1-1 draw against W Connection on 3 January 2014. The army/coast guard combination was subsequently suspended from the competition as part of the Government’s effort to address the steep murder rate.

Lasana Liburd is the managing director and chief editor at Wired868.com and a journalist with over 20 years experience at several Trinidad and Tobago and international publications including Play the Game, World Soccer, UK Guardian and the Trinidad Express.
@lasanaliburd
Previous Spain’s down with OPP, Neymar’s saucy 69 and Minala’s age-old secret
Next Marcus sets marker for Civic; Point downs Caledonia 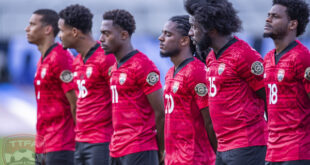 On Tuesday morning, the Trinidad and Tobago Football Association (TTFA) announced 28 players who would …