Trinidad and Tobago Pro League football clubs DIRECTV W Connection and Caledonia AIA both finished bottom of their respective CONCACAF Champions League groups last night as their continental assignments ended with 2-0 losses away to the United States and Guatemala respectively.

Comunicaciones scored with two first half headers from Jairo Arreola and Joel Benitez while a combination of the upright and some brilliant saves by Caledonia and Grenada international goalkeeper Shemel Louison kept the scoreline fairly respectable. While a stunning strike by Jason Johnson and a near post header from Bobby Boswell off a left side corner kick gave Houston a comfortable victory.

The results meant both teams exited the 2013/14 CONCACAF competition without a single win.

Connection managed one goalless draw against Dynamo in Port of Spain but lost its remaining three fixtures and scored just once with seven goals conceded. Caledonia lost all four matches and let in 13 goals despite scoring twice.

Both Trinidad teams were not at full strength—possibly with the upcoming First Citizens Cup quarterfinal fixtures in mind.

Connection coach Stuart Charles-Fevrier omitted Trinidad and Tobago internationals Joevin Jones, who is also the team captain, and Daneil Cyrus while Surinamese winger Stefano Rijssel was introduced as a late substitute. Colombian attacker Yefer Lozano also made his first appearance for the “Savonetta Boys” since being kicked out of the Digicel Charity Shield match against Defence Force.

Caledonia, the defending First Citizens Cup champion team, will play last year’s beaten finalist, Defence Force, from 8 pm on Monday at the Marvin Lee Stadium in Macoya. And Connection travels to Mahaica Oval on Saturday to tackle Point Fortin Civic FC in what is expected to be an emotional meeting of neighbours. 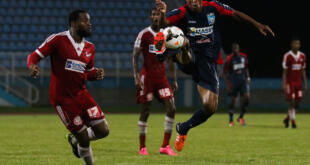 Hyron Best, a former St Augustine Secondary goalkeeper, was still an active player when he …