Twenty-two year old goalkeeper Glenroy Samuel, in his first game since re-signing for the “Eastern Stallions” saved a spot kick from young Connection substitute Johan Peltier as Caledonia won 4-3 in a penalty shoot after a tight, tense affair.

Regulation time ended goalless and was most memorable for the ground being farcically thrice plunged into darkness. And the two teams traded goals in extra time as a Radanfah Abu Bakr header was negated by a successful Clyde Leon penalty.

At the death, though, Caledonia prevailed from the spot for its first ever Caribbean title in a season that saw the Stallions lift three of five domestic Cup titles at stake and book its first appearance in the CONCACAF Club Championship.

In truth, Connection and Caledonia were virtually inseparable tonight and served up an impressive display of patient, clever football.

Twice, the lights went out during playing time—it was also turned off during the interval in an unsuccessful attempt to recalibrate the lighting equipment—and both times the players retook the field and continued without a hint of misplaced concentration.

Caledonia was more conservative for the opening hour.

Coach Jamaal Shabazz, who is simultaneously leading Guyana to unprecedented heights in the 2014 CONCACAF World Cup qualifying campaign, is getting used to hunting big prey now and the Morvant/Laventille outfit bided its time.

Caledonia kicked off with Devorn Jorsling alone upfront in a system that was more 4-5-1 than 4-3-3 and aimed at checking the run of Connection’s swashbuckling left back Joevin Jones and disconnecting the intricate midfield play of Clyde Leon, Andrei Pacheco and Gerard Williams.

Shabazz might have been the happier coach after a goalless first half but it wasn’t exactly comfortable.

Jones still got forward and crashed a half volley off the outside of the post in 11th minute. Strikers Jerrel Britto and Hasim Arcia went close too while a long ranged free kick from Pacheco prompted a sharp low save from Samuel.

Connection captain and custodian Jan-Michael Williams did well to deny Caledonia, right after the restart, as he turned a Jorsling free kick around the far post.

But Caledonia was soon on the back foot again and should arguably have fallen behind in the 56th minute save for loose finishing from Arcia.

An inexplicably wayward pass from Samuel gifted possession to Arcia inside the Caledonia penalty area but, unmarked from ten yards, the young striker hooked his effort wide at the near post.

Shabazz responded by sending on Jamal Gay to partner Jorsling upfront while Abdallah Phillips replaced an ineffective Nathan Lewis on the right flank as Caledonia switched to 4-4-2.

Connection coach Stuart Charles-Fevrier responded by pushing his full backs up to stay close to Caledonia’s wingers while midfield anchor, Williams (G), dropped into a libero role as their 4-3-3 became 3-4-3.

And, as Caledonia harrassed Connection’s midfielders, the “Savonetta Boys” returned the favour by stifling their opponents wingers and denying an outlet pass to Jorsling, who held the ball up well.

It was more of a coach’s game than a spectator’s delight.

And, although possession was not especially lopsided, chances at goal were certainly in Connection’s favour.

Samuel failed to adequately deal with a Rennie Britto corner kick but was let off by a wild Christian Viveros volley while Guyanese international Walter Moore was forced into a goalmouth clearance when Arcia finally got an effort behind the Caledonia keeper.

An inswinging corner kick from substitute Conrod Smith was flicked on by a teammate at the near post and the towering Abu Bakr made no mistake with a crashing header that matched his goal in the semi-final win over Antigua Barracuda.

But the teams were level again within six minutes as Surinamese referee Antonius Pinas pointed to the spot after Caledonia defender Nuru Muhammad got entangled with Britto (R) and Leon forced the ball home to Samuel’s left.

Composure deserted Connection in the subsequent shoot-out, though.

Moore was first and converted high and straight while Leon and Jorsling were also successful. But Connection full back Kern Cupid ballooned his shot overbar.

Smith and Jones scored for Caledonia and Connection respectively before Williams dived to his left to deny Keyon Edwards and set up a nervous close.

Arcia dispatched the next penalty and so did Caledonia captain Stephan David. But the pressure was too much for 20-year-old Peltier and the substitute’s kick to his left was easily fended away by Samuel.

The athletic goalkeeper signed for Antigua Barracudas last season but spent the year playing with a feeder team instead and opted to rejoin Caledonia.

It must have felt good for Samuel to be home yesterday.

And Caledonia AIA, once the poor cousins of the domestic top flight, is now the premier team in the Caribbean.

Lasana Liburd is the managing director and chief editor at Wired868.com and a journalist with over 20 years experience at several Trinidad and Tobago and international publications including Play the Game, World Soccer, UK Guardian and the Trinidad Express.
@lasanaliburd
Previous Islanders grab CONCACAF date with Beckham
Next PM shuffles her Cabinet; Jacks are wild 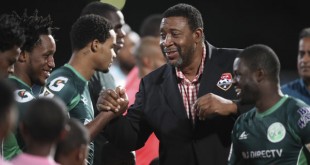