“[…] school authorities have not been processing refunds for lab and other fees duly paid by students this year. They also failed to deal with the urgent and legitimate questions about obtaining accurate transcripts, timely refunds or assisting students to graduate…”

The following letter to the editor about the close of the Trinidad and Tobago Hospitality and Tourism Institute was submitted to Wired868 by Anthony DJ Gafoor of Port of Spain:

The sudden announcement in August 2020 that the board of directors of the Trinidad and Tobago Hospitality and Tourism Institute (TTHTI) had taken the unfortunate decision to shut the doors of an institution that has been around in various incarnations since 1967 is a sad indictment of those charged with managing its fortunes. The decision to close demonstrates their inability to come up with creative ideas to stay afloat or at least to allow students near to completion of their studies to graduate.

They have blamed the lack of government subventions and Covid-19. While perhaps accounting for some of the factors affecting the viability of the school, this justification is simply an attempt to mask the true underlying and endemic reasons that led to its closure. It is, frankly, all too convenient an excuse to harness the contemporary pandemic to provide a basis for deciding to go into voluntary winding-up.

The fact is that decisions were taken to dismiss many of the dedicated administrators and lecturers whose lives were also overturned at short notice and who had sacrificed greatly for the good of the school and their charges through pay cuts.

For the past several years, it is a matter of record that the government had been questioning the lack of proper accounting systems within the school. These concerns, in fact, led to the decision to stop pouring millions of taxpayers’ funds into propping up an institution that refused to engage in proper accountability for the funds it received.

Moreover, over the last few years, students and parents/guardians alike, at a time of economic downturn and job instability, took out significant loans or dug deep into their savings to finance studies, on the premise, and indeed pretext, that they would be reimbursed when the GATE funding became available. These funds, in fact, never materialised.

Added to this injustice was the fact that there were lingering doubts over compliance with the accreditation process required by the Accreditation Council of Trinidad and Tobago. This process was vital for the due recognition of the various qualifications offered by the school and which, from all accounts, was never completed.

As far back as 2015, the government had pledged to upgrade the TTHTI to a full-fledged tertiary institution, no doubt recognising the importance of the school in providing a pool of well-trained persons contributing to the hotel and catering industry, nationally, regionally and internationally. Further, such an objective was also in keeping with the recognised need for diversification of the economy, as well as offering a cadre of persons and services to help the country compete with other established tourist destinations in the Caribbean and further afield.

Parents and guardians of students, as well as the students themselves, through online petitions and sharing their heartfelt experiences publicly, have tried to garner support to reverse the ill-timed decision to close the school. The closure has left many students, particularly those on the verge of completing their studies, in the lurch, with no plans in place to help them complete their studies.

The much-promised ‘town hall meeting’, which took place online a few weeks ago, was ostensibly designed to give some reassurance that contingency plans would be put in place to assist such students. Instead, all that was offered was limited information on certain courses and options that were virtually useless as viable alternatives, particularly for those students who were engaged in studying culinary management.

Culinary management is perhaps the most important course to directly benefit the tourism and hospitality sector, considering the minister of tourism announced earlier this year that no fewer than three new hotels were to be established.

It is to the discredit of the TTHTI and those who managed that event that the only possible school that appeared to offer a similar course in culinary arts, the Tobago Hospitality and Tourism Institute, was not even represented at that meeting. Thus, no one could address any concerns as to the viability of such studies at a time when we are all encouraged to be mindful and circumspect about our movement.

The minister of education has made several attempts to meet with the TTHTI authorities, which appear to have been met with little or no cooperation by the latter. Instead, they have chosen to blame the ministry for the demise of the school when clearly there were deep-seated concerns about the way the school was being managed. It is interesting to note that the TTHTI’s board has consistently denied blame for the closure, but instead, it has sought to castigate the government.

To add insult to injury, the school authorities have not been processing refunds for lab and other fees duly paid by students this year. They also failed to deal with the urgent and legitimate questions about obtaining accurate transcripts, timely refunds or assisting students to graduate raised at the town hall meeting. Instead, they re-directed the explicit concerns to its email.

However, despite claiming they would respond to such email queries and concerns, that is simply not taking place.

While the TTHTI seems to want to hide behind the cloak of being a private educational institution, it didn’t seem to have a problem accepting millions of subventions in taxpayers’ money. Indeed, it is on record as adopting the questionable position that it was not obligated to report its financial position to the ministry of education!

Perhaps the ‘heavy heart’ with which the school announced its sudden closure can be made lighter by a greater effort by the school board to cooperate with the government and to be more responsive and caring towards those directly affected by the closure. Instead, all that has happened thus far is that students and parents/guardians now must go through further trouble and expense to migrate to other courses that may not be suitable.

The minister of education has promised that ‘the ministry will make all efforts to ensure that the students’ efforts do not go down the drain’. She has called upon the TTHTI to fulfil its obligations to the students.

This is indeed the time for action by the government, as the machinations of the TTHTI cannot be allowed to further mar this country’s reputation as a viable tourist destination and holiday resort. This is too important a sector to lapse at this important historic time when decisions can make or break the future of our economy.

Want to share your thoughts with Wired868? Email us at editor@wired868.com. Please keep your letter between 300 to 600 words and be sure to read it over first for typos and punctuation. We don't publish anonymously unless there is a good reason, such as an obvious threat of harassment or job loss.
Previous Dear editor: What causes layoffs, what happens after they occur and what the law says
Next Daly Bread: Disconnections and loose ends; making education our ‘great equaliser’ 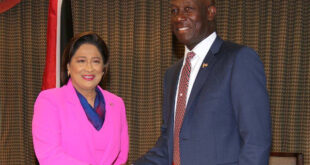 The immutable law of nature is: what we sow, we will reap. We will not …