It says a lot for the Mighty Sparrow that sexagenarians and teenagers alike—and all the age-groups in between—often answer that question in the affirmative.

In Calypso History Month, the cognoscenti always get together to talk, well, calypso history. Much is made of the Birdie and perhaps most of it is positive. After all, as Sniper has said so accurately, our stories are told by calypsos and many of those stories have to do with the battle of the sexes.

No one, even Sniper would have agreed, has told those stories better than Sparrow. But because history is written by the victors, during debates about calypso, the elephant in the room is almost always female.

With good reason: more than half a century after Sparrow immortalized the two already mentioned ladies of the night in song, and just under a quarter of a century since their flesh and blood incarnations mounted a Port of Spain stage, the almost mythical pair are arguably as well known as the first female Prime Minister of the country—for entirely different reasons, one hastens to add.

Others, like Rosita and Clementina, are rather more shadowy figures, with their renown dependent on the ones who are more celebrated—a little like Anika Gumbs, say, and Dr Gregory Bissessar.

But the critical point to be made here is this: the depiction of the innumerable women who people the calypso from the mid-20th Century to now, whether primary or secondary character, is almost unrelentingly unflattering.

And, as we have already tried to show, for that we have Sparrow to thank—or otherwise. However, Dr Bird is certainly not alone.

Though much less guilty of the sin than their male counterparts, the female exponents of the calypso art have hardly helped to sanitize the image of their sisters that emerges in the genre. Singing Francine’s “Runaway” is an expression of both sympathy and empathy for long-suffering women who are unable to bring themselves to take the final step and leave the abusive relationship.

The “you” in the verse is ostensibly the abusive male partner but the whole chorus offers advice directly to an unnamed woman. Truth be told, “Dog does run away, cat does run away (…) woman, you could run away too” is a rare drop in the bucket.

Another drop comes in Singing Sandra’s “Voices from the Ghetto” where she celebrates women who are, she says, in the midst of real adversity, “stronger than a wall.”

On the face of it, Sandra’s 1987 hit “Sexy Employers” is a song that burnishes the image of womankind. Writing in the Guardian several years later, culture journalist Michael Mondezie said, “The song mirrored Sandra’s image and spiritually strong moral standing and was an immediate hit with women in society who identified with (sic) the images of male chauvinism in the workplace.”

This impression, I suggest, is derived from a focus on the “die with my dignity” punchline. Close scrutiny, however, does not support that view. Even without knowing that the song came from the pen of Tobago Crusoe, the attentive listener is likely to come away with the impression that the song was written by a man.

But there are some men whose work provides glimpses of positivity. Interestingly, Stalin takes time out in “Wait, Dorothy, Wait,” to fume that, despite the tempestuous times being experienced, calypsonians are still singing about “rum and woman.”

And in songs like “We Can Make It If We Try,” “Black Man Feeling To Party” and “No, Woman, No,” he gives the distinct impression that the relationship he shares with his significant other is a genuine partnership.

(“Is just a little ah your sweat, woman, and my sweat that we wrup up together just to make life sweeter for we son and daughter.”)

Lord Nelson’s “Mih Lover” too appears to be based on a relationship in which man and woman are equals. The calypsonian proposes that they “discuss what we should and shouldn’t do” and eventually affirms that “Your love too precious and too delicious to lose. And you too vital and too special to abuse.”

Like Scrunter’s “Woman on the Bass,” Kitchener’s “Flag Woman” (“a woman really have the touches to send you bumping”) celebrates a woman as an admirable exponent of a difficult art rather than as a sex object. The same is not, however, true of Blueboy’s Rebecca or Ethel in the eponymous early 1980’s road marches nor is it true of Kitch’s Audrey in “Sugar Bum”. (“Audrey, wey yuh get dat sugar?)

Shadow’s “I Come Out To Play” presents us with a woman comfortable with doing the trawling (“Ah drink up mih whiskey and I smoke up my tampie. (…) I am in search of a man with your description and you got to play with me from now until Ash Wednesday.”)

Not so David Rudder’s “Bahia Girl.” Therein, King David is “a man with a plan,” who declares early ‘o’ clock that “Ah make up mih mind tonight this Brazilian is mine.”

More enigmatic, however, is “Bacchanal Lady” where a curious ambivalence seems to be at play, an ambivalence replicated in “Madness.” There we get a glimpse of a “glasses thing (…) who used to walk the road like she cyar touch the ground” and has “about 12 GCE and went to Holy Name.”

In “Maria,” Blakie depicts the woman of his dreams as a covetous female intent on using the calypsonian to feed her expensive tastes. (“She’s somewhere hiding in the back there. As ah finish sing and get mih money, she take everything.”)

Millicent in Zandolie’s “Too Much Man Family,” drives the calypsonian to complain that, “Yuh is the only woman I know all yuh family is man.” She too takes unfair advantage (“Ah doh mind yuh giving me a butt”) of the calypsonian. Zandolie is not afraid to admit that domestic violence—or at least the threat of it—is a part of the equation. (“Ah doh want to break yuh blasted jaw, ah doh want to tangle with the law (…) Dat is all yuh cud ever bet why I eh puncture yuh blasted jawbone as yet.”)

Penguin threatens more than just a broken jawbone when he comes home unexpectedly and finds an unfamiliar slipper under his bed. “What dat slipper doing under mih bed?” he asks in “The Slipper:” “Tonight yuh go see how ah dread ‘cause tonight somebody go dead.”

Tommy, in Tambu’s “Yes, Darling,” has lost his job and now has to take responsibility for the household chores. The abuse here is psychological rather than physical but, more importantly perhaps, not the victim but the abuser is female (“Everybody kicksing off on Tommy.”)

It is doubtful whether anyone sees as a glutton the woman in Gypsy’s 1972 calypso “Cane” who goes “for cane” every day of the week. At any rate, it is not the raw material that kept Caroni and Brechin Castle going for so many years that she is perceived as being greedy for.

And in “No Money, No Love,” Sparrow’s Ivy is self-assured enough to “have a next man in South.” When, however, the crunch comes, she doesn’t quite manage to give as good as she gets but before “Johnny nearly kill she with blows (…), she give him some good kick and some bite.”

But as we have already shown, parsimonious with his praise, Sparrow, the self-proclaimed “Village Ram,” takes male chauvinism to an entirely new level—not height but depth.

Earl Best taught cricket, French, football and Spanish at QRC for many years and has written consistently for the Tapia and the Trinidad and Tobago Review since the 1970's. He is also a former sports editor at the Trinidad Guardian and the Trinidad Express and is now a senior lecturer in Journalism at COSTAATT.
Previous Hello and goodbye! Bostock pulls out of T&T squad again and will miss Costa Rica game
Next Intercol 2016: Shiva Boys KO Benedict’s; St Augustine, Trinity/E and Malick on winner’s row 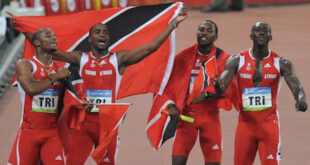 “[…] Kitch was not a medical doctor, a lawyer, an engineer, a banker, or someone …