Machel Montano is ready to be named “Ambassador Fete” as the soca star wants the title of official cultural ambassador to be added to his $2.5 million Soca and Groovy Monarch cash prizes and his Road March crown in an all-conquering 2012 Carnival season.

In other news, it is alleged that Calypso Monarch Duane O’ Connor asked Crime Watch host Ian Alleyne to hunt down the additional $500,000 cash prize promised for his own triumph.

Mr. Live Wire is an avid news reader who translates media reports for persons who can handle the truth. And satire. Unlike Jack Nicholson, he rarely yells.
Previous Rudder survives death by rumour… For now
Next BBM armed and dangerous 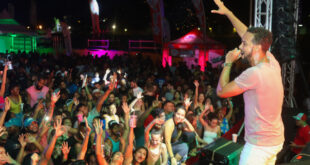 You don’t have to put anyone down, to elevate another. Kees Dieffenthaller, is my current …