The Trinidad and Tobago Men’s National Senior Team technical staff must wait a bit longer to receive their first pay cheques for 2021, after the Robert Hadad-led Fifa-appointed normalisation committee again failed to live up to its word.

On Friday 7 May, the normalisation committee assured Unified Football Coaches of Trinidad and Tobago (UFCTT) interim president Jefferson George that the Trinidad and Tobago Football Association (TTFA) would pay four months’ salary to the senior technical staff as well as satisfy the remaining debt to staff of the men’s and women’s teams and offer stipends to local-based Soca Warriors by ‘the end of the month’.

Hadad did not attend that meeting, which was chaired by normalisation committee vice-president Judy Daniel and included floor members Nigel Romano and Trevor Nicholas Gomez.

“They have committed to clearing the debt for players and staff by this month’s end and are considering ways to address those due salaries [from national teams] before then—but those won’t be addressed in this tranche,” said George, in an interview early last month. “[…] They also said the stipends will be paid [to the national senior team players].”

Monday 31 May was the Indian Arrival Day holiday. The normalisation committee did not meet their obligation on the last working day of the month, nor did they do so on Tuesday 1 June or today.

The late payment is an unwelcome distraction for George, who faces calls and messages from coaches around the clock for updates. The former Boys’ National Under-15 Team goalkeeper coach still expects the local football body to pay though.

“Well, we still expect to receive the payment this week,” George told Wired868 tonight. “I would have preferred to be able to move past this today but seems like it will be a couple more days. There is not much more than I can say now.”

The Soca Warriors were also left waiting. The TTFA did not pay any stipends while the players received only one match fee from their two fixtures in the March international match window.

The normalisation committee paid fees for their 1-1 World Cup qualifying draw with Puerto Rico on 28 March but not their 3-0 win over Guyana on 25 March. It is uncertain whether Hadad and company choose to honour the latter outing so as to delay paying the players’ modest win bonus for their opening triumph.

As with the coaches, the football administrators are promising to satisfy the debt soon—but they are not giving a specific date. And, again, they comfortably missed the first deadline to the Warriors without either an apology or an explanation.

The world governing body insists that its funding cannot be used to satisfy historic debts at the expense of the member association’s operations.

So what did Hadad, Daniel, Romano and Gomez do with the money?

Thus far, the secretive officials are refusing to tell even TTFA member delegates how they are using the local football funding. Fourteen months since his appointment, Hadad is yet to hold a national press conference or general meeting within the TTFA.

Still, Wired868 understands that mood in the Men’s National Senior Team camp is relatively upbeat, as they prepare for two decisive fixtures against the Bahamas on 5 June and St Kitts and Nevis on 8 June.

The Bahamas played away to Puerto Rico this evening and were routed 7-0. Already eliminated, the Bahamas travelled to Mayaguez without captain Lesly St Fleur along with other experienced players and spent much of the time pinned in their own half of the field.

Soca Warriors head coach Terry Fenwick could not have missed the Bahamas’ inability to defend down either flank—as their full backs were often left to defend one on one—or how hapless 18-year-old custodian Ian Lowe looked while trying to handle crosses.

It should be meat and drink for Trinidad and Tobago wingers Levi Garcia and Joevin Jones, who scored a goal apiece in the match window.

If St Kitts and Nevis and Guyana play to a draw on Friday, the Warriors can go to the top of the group with a win by three or more goals in Nassau on Saturday, and would only need a draw when they play SKN next Tuesday. If the ‘Sugar Boyz’ defeat Guyana, Trinidad and Tobago will need to win both of their outings.

Trinidad and Tobago have met St Kitts and Nevis nine times in competitive outings and won every time. The Boyz managed two friendly wins over the Warriors, with their last triumph coming 19 years ago—when they won 2-1 in the Sugarbowl Festival against a weakened T&T squad led by interim coach Clayton Morris.

St Kitts and Nevis have welcomed West Brom midfielder Romaine Sawyers back into their ranks for the clash along with fellow England-born forward Harry Panayiotou, who plays semi-professional football with Aldershot Town in the fifth tier of the English game.

Panayiotou, a former Leicester City academy player, has 10 goals from 25 international appearances with St Kitts and Nevis, while Sawyers has four goals from 26 national caps.

At present, Fenwick has 23 from his 28 selected players with him in Nassau, with captain and midfielder Khaleem Hyland and defender Neveal Hackshaw expected to join them later this week.

Defender Luke Singh, who is training with the Canada National Senior Team at present, goalkeeper Nicklas Frenderup, and flanker Jomal Williams should meet the Warriors in the Dominican Republic for next Tuesday’s top of the table clash.

Although there is no question so far about the focus of the Trinidad and Tobago players and technical staff, they would probably all sleep a bit easier when the normalisation committee makes a deposit into their respective bank accounts—hopefully sooner rather than later.

In other World Cup qualifying action today, Rajesh Latchoo’s Dominica whipped Stern John’s Anguilla 3-0 in a clash of two nations led by Trinidad and Tobago coaches. Both teams already have no chance of advancing from Group D and are playing for pride.

Cuba also whipped the British Virgin Islands 5-0 in Group B, while Aruba came from behind to defeat the Cayman Islands 3-1. None of those outfits have a mathematical chance of getting to the second round of the Qatar 2022 World Cup qualifying series.

Lasana Liburd is the managing director and chief editor at Wired868.com and a journalist with over 20 years experience at several Trinidad and Tobago and international publications including Play the Game, World Soccer, UK Guardian and the Trinidad Express.
@lasanaliburd
Previous B&B Ep 9: Angus Eve on Bertille’s life lesson, developing Molino, and the Pres-Naps rivalry
Next ‘It’s simple… and I enjoy doing it!’ Day in the Life of a crochet designer 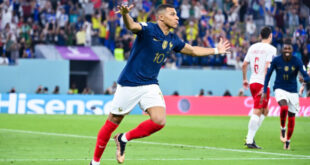