TTPS: No investigation of Wallace-led TTFA; football president accuses i95.5 of destabilising campaign

The investigation was revealed on i95.5FM as ‘breaking news’ this morning by talk show host Andre Baptiste. Baptiste spoke to Commissioner of Police Gary Griffith, who confirmed that the police are investigating the local football body.

Baptiste’s promo stated: “The Fearless One Andre Errol Baptiste talks with Police Commissioner Griffith on some recent developments involving Police and football at 10am on i95.5FM… Listen attentively… It is unravelling!!!”

However, what Baptiste did not say is the investigation mentioned on his show—as confirmed by a very senior  TTPS source—was actually filed roughly three years ago and centres on a former administration, headed by the late president Raymond Tim Kee and general secretary Sheldon Phillips.

How can a police probe started three years ago on a football administration that demitted office in 2015 be considered a ‘recent development’?

Wired868 asked Baptiste: Is this an investigation into the current administration or the Tim Kee administration? And if it is the latter, then how can it be considered as ‘recent’? Are you intentionally trying to mislead I95.5FM listeners into believing the police are investigating the William Wallace-led TTFA administration when you know that is not the case?

Baptiste’s response to the aforementioned question was: “Please refer all questions to the police.”

Wallace, who appeared on Baptiste’s show on i95.5FM yesterday evening along with his general secretary Ramesh Ramdhan, criticised the radio station’s broadcast this morning and claimed that people with cynical motives were using the media to destabilise his administration.

“Everything is being done to make sure that Fifa comes into Trinidad and Tobago [with a normalisation committee],” Wallace told Wired868. “And this is not a one man effort; it is a effort involving many persons. Anyone who sees a headline like that one from i95 will think it has something to do with my administration.

“They are are trying to do everything in their power to encourage and justify a normalisation committee.”

At least some of the media confusion was, arguably, made by the current administrators themselves. A Trinidad Guardian article yesterday titled ‘TTFA reveals $50M debt-eradication proposal’ and based on an interview with Ramdhan, caused collective head-scratching, as the general secretary suggested that the local football body signed a Memorandum of Understanding (MoU) for a ‘multi-billion dollar state-of-the-art football, residential and sporting facility’ to be constructed at the Arima Velodrome.

The project, according to Ramdhan, was scheduled to begin later this year and involved ‘international UK architecture firm’ Lavender and the Arima Borough Corporation.

The Arima Borough Corporation, headed by Mayor Lisa Morris-Julian, wasted little time in pointing out that the Borough was not even formally considering the project—since it still has not received an official proposal—far less about to allow any work to be done.

In January 2020, Morris-Julian received a ‘courtesy visit’ from the TTFA which discussed the project. However, officials of the local football body were advised that:

“Following this, the officials of the TTFA stated that they were making arrangements for a formal proposal,” stated the Borough release. “To this date, there was nothing forthcoming to Council.”

Ramdhan said the project was not, as some have speculated, another ‘Home of Football’ or even a TTFA-led initiative. Instead, he suggested that a private investor, Lavender, was in the market for a facility that could be upgraded and sold for profit.

So, essentially, Lavender would upgrade the Velodrome and create a business centre and high-rise gated residential community in the same location. The property would be leased to Lavender but the Borough would retain its ownership. And the TTFA, according to Ramdhan, would get TT$50 million for simply facilitating the deal.

The TTFA had not returned to the Borough, he said, because they were supposed to discuss the project with Prime Minister Dr Keith Rowley. They hoped to meet Rowley in mid-April, only for the Covid-19 pandemic to make it impossible for the international would-be investors to fly to Trinidad.

“Lavender get their profit from selling the condominiums, we resolve our debt and the Arima Corporation gets a state-of-the-art facility and a business centre, which the TTFA will hope to have profit sharing in,” said Ramdhan. “It is a win-win all around.”

Wired868 could not locate any online evidence to suggest that Lavender is a reputable company with a history of completing projects of this scale.

Wired868 remains unable to substantiate the credibility of Lavender.

If Lavender is not a household name and discussions with the Arima Borough Corporation were at a preliminary stage at best, why did Wallace pass the proposed deal on to Fifa as the cornerstone of their debt reduction solution? And why did Ramdhan share the information with the Guardian?

“Making it public with the Guardian to me was a problem and I spoke to the secretary on that,” said Wallace. “We were not ready for that. In terms of the Fifa part of your question, based on my knowledge of Lavender—and there was another international investor who was very much interested in investing in the project and advance money—I was 98 percent sure that the project was a reality.

“I was extremely hesitant to hand over the MoU to Fifa. But based on the situation we were in [as we were being] pressured to give a credible answer to our debt, I handed it over to Fifa.”

Wallace said Lavender were involved in construction for the Qatar 2022 World Cup and are still keen on the Arima project, although some of their potential sponsors were spooked by the ‘negative press’ aimed at his administration.

The estranged football president stressed that he had no issue with the truth but said they were victim to a barrage of ‘spin’.

“There are people who profess to love Trinidad and Tobago football but are doing everything to make sure it does not progress,” said Wallace. “One of our sponsors who promised to put in 250,000 pounds has pulled out because of what is happening in the press. It is extremely sad that the people who are doing everything to get into power will so destroy football that when they get back into power, they will be starting from zero.

“The truth must be told, yes, but they put a particular spin on it so as to create a totally different impression.”

At present, the TTFA is awaiting a normalisation committee. Last Tuesday, Fifa secretary general Fatma Samoura informed the local football body that its board of directors had been dissolved and controversial finance manager Tyril Patrick was now in charge of its affairs.

However, on Saturday morning, Patrick informed New City Chambers attorneys Dr Emir Crowne and Matthew Gayle, who were hired by the ‘TTFA executive’, that he had decided to decline the Fifa appointment.

Fifa has not indicated who will take Patrick’s place.

The New City Chambers attorneys wrote Fifa last week and announced their intention to appeal the matter at the Court of Arbitration for Sport (CAS), as is permitted by the world governing body’s statutes.

AFL Architects and BH Sports and Entertainment are both easily searchable online. Wired868 remains unable to substantiate the credibility of Lavender. 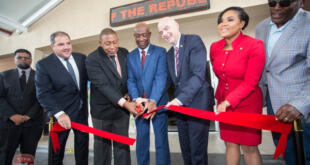