Letters to the Editor Sunday 14 April 2019 Other Sports, Volley 16 Comments

“Trinidad and Tobago Men’s National Hockey Team head coach Glen ‘Fido’ Francis: ‘We finished seventh in 2011 and 2015, so seventh or eighth is not a big thing’.

“Interesting to note Francis was the coach at these competitions [in 2011 and 2015]! It is unbelievable that members of the TTHB sat in this meeting and seemed to be okay with the nonsensical words that were coming out of Francis’ mouth; or maybe were just too ashamed to comment.

“[…] Are we going to sit idly by and watch Francis destroy the hopes of our talented youths and hockey? […] Why bother having four sessions per week if you already predetermined the result?”

As technical director of the Malvern Sports Club, I was recently invited by my club to attend a meeting with the Trinidad and Tobago Hockey Board (TTHB) to discuss the refusal of Men’s National Senior Team head coach Glen ‘Fido’ Francis to allow goalkeeper Andrey Rocke to train with the team training squad in preparation for the 2019 Pan American Games.

Rocke was debarred because he was unavailable, for personal reasons, to participate in one of three beep tests set out by Francis. Rocke wrote to the TTHB asking to be excused from training for a few months because he was pursuing international certification as a physical fitness/training instructor.

But let me backtrack a bit. The TTHB sent out an invitation to all its member clubs [on 23 August 2018] requesting them to inform specific players—including Andrey—to attend one of  three beep tests [which were held on 8, 15 and 22 September 2018].

Malvern shared this information with their players in its Whats App group. Unfortunately, Andrey was not in the group and, as a result, Andrey did not receive the information in a timely fashion.

Once alerted, Andrey wrote the TTHB [on 23 September 2018] indicating his interest to continue as a member of training squad at a later time because of job obligation.

Francis responded to Andrey’s request in the negative, indicating that he would not be allowed to train with the squad because the team—which resumed practise on 6 August 2018 for the July 2019 Pan American Games—would be too advanced with regards to their technical and tactical preparation.

Andrey then wrote to the TTHB to seek their intervention but the Hockey Board supported Francis’ decision. May I add that this is the same goalkeeper who was solicited—and accepted the invitation to play—two hours after the passing of former goalkeeper Kwesi Emmanuel and one day before the departure of the team for the 2018 CAC Games.

Andrey has been a member of the men’s national team for the last 12 years. His abilities as a goalkeeper are unquestionable. He has amassed 135 international caps and received countless awards for his goalkeeping skills, locally and internationally. He is employed as a physical fitness/instructor and has never failed a beep test or any other test in his years with the team.

Here is my reason for penning this letter: coming out of the meeting, it was very clear that the TTHB and its servant coach Francis is prepared to take a sub-par goalkeeper to our premier regional competition, the Pan Am Games.

Many elite coaches will tell you that your goalkeeper is 70% of your result. They are the one true specialist in the game. If we were to research the number of shots that goalkeepers must save during a match—from penalty corners, field play and shootouts—their performance is far more influential than a striker missing a goal or two.

So, is it in our country’s best interest to omit Andrey at present?

Let’s examine our national team’s situation. International hockey operates in what we, as international coaches, like to call a four year cycle. The Pan Am Games, which offers our only direct qualifying route to the Olympics, is at the pinnacle of Trinidad and Tobago’s cycle.

Only the Pan Am Games winner qualifies for the Tokyo 2020 Olympics. However, a top four finish allows for automatic qualification to the Pan Am Cup Championships, the CAC games and the Commonwealth Games.

Argentina have maintained a consistent ranking between first to fourth in World Hockey within this cycle (2017-2020). Canada, who we have also never defeated, are ranked 10th with USA  25th, Brazil 27th and Chile 28th. Trinidad and Tobago are ranked 33rd.

Finishing in the top four at the Pan Am Games is always a realisable achievement for our hockey team. Can it be achieved without the best goalkeeper in the country? NO! Absolutely not.

A top four finish gives our men’s hockey team continuity, as it allows for regular qualification and appearances at major competitions. A case in point for the issues caused by taking such tournaments lightly is our ladies team, which has not qualified for the Pan Am Games since 2011 because the TTHB acted in the same way and discouraged some of our most talented players.

Francis seems to have worked out his team’s situation ahead of the 2019 Pan Am Games and decided that his best possible result is seventh or eighth. Now these are not my words; they are his, during our meeting on Rocke.

Interesting to note Francis was the coach at these competitions [in 2011 and 2015]!

It is unbelievable that members of the TTHB sat in this meeting and seemed to be okay with the nonsensical words that were coming out of Francis’ mouth; or maybe were just too ashamed to comment.

I was ashamed for sure, as I understand the importance of the championship—having represented our country at three Pan Am Games.

So how does the rest of the team feel about this? I can guarantee you they don’t agree with coach Francis. And if he did convey that feeling to them, it may be the reason that the national team’s attendances is at an all-time low.

I am still trying to come to terms with the decision to omit your best goalkeeper for your pinnacle competition, knowing the government of Trinidad and Tobago has invested a significant amount of money in the preparation of this specialist player over the years and in this cycle. I believe it is a case of personality clashes and Francis seems to not care about the players and Trinidad and Tobago’s hockey.

Are we going to sit idly by and watch Francis destroy the hopes of our talented youths and hockey? What about the Marcano brothers—Tariq and Teague—training relentlessly in England to make their contribution to the national team this summer at the Pan Am Games? Did ‘Fido’ indicate his feelings to them?

Why bother having four sessions per week if you already predetermined the result? Why not just meet in the Piarco airport and fly out to the championship?!

Gone are the days when we allow decisions like this to go unchecked. Francis must be replaced for that astonishing statement—“We finished seventh in 2011 and 2015 so seventh or eighth is not a big thing”—which says he lacks the necessary coaching skill-set and motivation to lead this team.

If he cannot motivate himself how can he motivate his charges? Shame on you Glen Francis and the TTHB for putting self before country!

Want to share your thoughts with Wired868? Email us at editor@wired868.com. Please keep your letter between 300 to 600 words and be sure to read it over first for typos and punctuation. We don't publish anonymously unless there is a good reason, such as an obvious threat of harassment or job loss.
Previous Daly Bread: The boundaries of Attorneys General; from Cox and Barr to Ramlogan and Al Rawi
Next Noble: The Story of Nalini; how contrived colonial rifts still divide our multi-cultural society 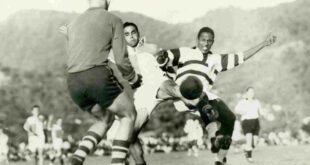