Breaking News
Home / View Point / Guest Columns / Demming: Why Petrotrin is a socio-cultural fiasco that will darken at least 35 communities

Demming: Why Petrotrin is a socio-cultural fiasco that will darken at least 35 communities

I’m a “glass half-full” kind of person, which is why I see the Petrotrin closure as an opportunity for inspired leadership on one hand, and the transformation of our people on the other.

Leadership and transformation both require a willingness to change the way we see things. The behaviourists talk about changing our mental models, but before we change those mental models we have to engage in a deep conversation about how and why we need to change. And this is where my “glass half-full” notion becomes fragile and even smashes to smithereens.

All I see before me is confrontation, one-upmanship, winners (at least, those who think they are) and losers (many who know they are). This is too important a decision for fragile egos to prevail. It requires inspirational leadership and communication.

Businesses go “belly-up” every day but what makes a difference is the capacity of the people involved to see the opportunity in the crisis, and their willingness to roll around in the mud and come out with clear action plans which will be honoured by gentlemen.

The closure of Petrotrin goes way beyond the disappearance of the flare which has brightened the skyline for more than 75 years. The closure will see the darkening of more than 35 fence line communities which thrived because of the business generated by employees at the Refinery.

Gasparillo, Marabella, Plaisance Park, Claxton Bay will change because the refinery no long exists. The delivery of medical services to 20,000 persons annually will also change. The positive outcomes derived from the company’s support for sport and culture will change if not disappear.

These are not hard economic arguments but sociocultural considerations. Indeed, the loss of activity in the area will cause loss of business to the area—from fruit and snack vendors to stores and gas stations, all will be affected.

These business owners might go from contributing to the economy, to being a drain on it. The loss of healthcare might financially finish off some families, who also might end up having to rely on government handouts.

From a leadership viewpoint, we will see the extent to which this Dr Keith Rowley-led administration can use this as an opportunity to change governance structures at state enterprises. We will see if there is the capacity to transform the public service.

We will see if a model emerges which can make WASA into a productive enterprise. This situation has been played out before, such as the loss of the sugar cane industry which is thriving in other parts of the world—not just for sugar, but alcohol as fuel and other products.

If none of these happen, then it will be fair to conclude that another opportunity for transformation has been squandered and perhaps the leadership capacity just does not exist.

In today’s mediated communications world, leaders have a responsibility to shape the narrative by telling their story. The story of the closure of the refinery has not been told and if anything has raised a level of mistrust which will take a long time to change.

What we are seeing is an “old power” approach in which the Prime Minister and a select few hoard resources like a dam holding back water—flooding some areas to destruction, while causing drought elsewhere.

What is actually needed is a new power approach which is “open, participatory and distributed”, the way rain and rivers distribute water in a forest, so everything grows and thrives. Countries like Qatar, Saudi Arabia and Norway are successfully doing this, so this is not a pie-in-the-sky idea.

The big question remains: is the T&T leadership grown-up enough to do this, and are the T&T citizens responsible enough to handle the resources?

Dennise Demming grew up in East Dry River, Port of Spain and has more than 30 years experience as a Communication Strategist, Political Commentator and Event Planner. She has 15 years experience lecturing Business Communications at UWI and is the co-licensee for TEDxPortofSpain. Dennise holds an MBA, a B.Sc. in Political Science & Public Administration and a certificate Mass Communications from UWI.
Previous CPL 18: Did Lara put ‘goatmouth’ on TKR or were Bravo’s men playing dead to ketch Amazon cobo alive?
Next Guyana’s Warriors triumph again; TKR face Eliminator on Friday after dramatic loss in Providence 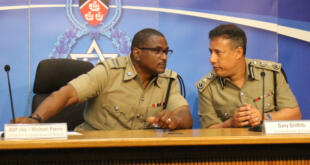 Noble: The sound of a dying democracy; the problem with Bayside party exchange