If long-standing Concorde Athletic Club coach Ken Barton were still guiding Commonwealth Games 100m gold medal winner Michelle-Lee Ahye, she would have run in the 4x100m relay. And if he were in charge of the National Association of Athletics Administrations of Trinidad and Tobago (NAAATT), the umbrella body would not hesitate to develop and implement policies concerning athletes’ participation in relay events.

That, he says, is necessary to prevent future damage to this country’s hopes of winning medals on the world stage.

“No, I was not surprised [that she did not run the relays],” Barton told Wired868. “When she said she wasn’t going to run, I knew she was going to follow through because she always sticks to her word. The NAAATT needs to stamp its foot down because it will hurt our medal chances in the future.

“Right now, there is no kind of policy in place and an athlete should not be allowed to pull out of a relay unless they’re injured and able to provide the medical records as well. […] The NAAATT should have stepped in earlier when Michelle made the ‘home girl’ statement.”

And Barton’s dissatisfaction extends beyond the athlete and the umbrella body to the Guardian newspaper, which published a front page story seeking to make capital of Ahye’s sexual preferences.

“That should not have been printed,” Barton said. “Her lifestyle is wrong in the eyes of God. As her [former] coach, I had to accept her and I accepted her […] Michelle wears her heart on her sleeve and she never intended to hide what she likes. She never hides anything. It’s either you accept her or you don’t.”

Ahye’s response to the Guardian story was to take down all her social media pages. Barton was disappointed that the former Concorde athlete had not handled other matters quite as tactfully.

Involved in a very public verbal spat with multiple Olympic medallist Ato Boldon before the start of the Gold Coast Games, Ahye had announced her intention to sit out the relays. And even after winning gold in the 100m dash, in which there were two other Trinidad and Tobago runners, Khalifa St Fort (6th) and Reyare Thomas (7th), Ahye did not change her mind.

“I know her withdrawal from the relays was because of her tiff with Boldon,” said Barton, who noted that the now 26-year-old Ahye had joined Concorde at the age of nine and only left 12 years later at the age of 21, “not under the best circumstances.”

Barton, a coach with over 30 years of experience, explained that the plan was for Ahye, upon leaving Concorde, to go through the US Collegiate system before turning pro. However, the sprinter, whom Barton described as a “ball of fire always rearing to go,” opted to turn pro immediately.

It was a decision which, at the time, had not gone down well with Barton but he admits that he is now happy that Ahye is reaping some rewards.

Prior to her 11.14 second triumph in the 100m final—the country’s first gold at the Commonwealth Games for 20 years—no T&T athlete had placed first at those Games since Boldon won the 100m event in Kuala Lumpur in 1998. Boldon beat Namibia’s Frankie Fredericks and Barbados’ Obadele Thompson to the tape in a time of 9.88 seconds, then the fourth fastest legal 100m run ever.

It was ironic, then, that Boldon’s “lane fillers” comments might have been the spark that drove Ahye to speed down the Gold Coast track to 100m glory and then stay out of the relay. Particularly as Jereem “The Dream” Richards also fought hard to earn T&T a second gold medal in the Men’s 200m event before competing in the 4×400 metre relays.

Barton declined to say whether he was aware of any earlier tensions existing between Ahye and Boldon. But he did tell Wired868 that, at the tender age of 13, just after she had had great difficulty getting the better of then club-mate Crystal Rogers, his former charge had told him that she did not want to lose another 100m race.

Barton said he could give her no such assurance but he promised to do what he could to get her upright and into her drive phase so as to be able to compete with the world’s best.

In Concorde, Ahye was soon upstaging her seniors Fana Ashby and Ayanna Hutchinson. And gold medals would follow at the Carifta Games and Pan Am Juniors in 2010 and 2011 respectively.

It was plain for all to see that Ahye was knocking on the door recently. She finished in sixth place in three major finals—the 100m and 200m finals at the 2016 Rio Olympics and the 100m finals at last year’s World Championships in London. But that coveted big stage gold remained elusive until this month, when the former Tranquility Secondary student blew away the opposition in Gold Coast, relegating the Jamaican pair of Christiana Williams, fourth in the Rio 100m, and Gayon Evans to the minor placings.

In 2010, the coach had told his then teenaged charge that he expected her to stand on the podium at an international event in six years’ time. He was two years off but he is overjoyed to see his prediction come true, doubly so since the medal is gold.

Barton explained that the Carenage-born Ahye has never been afraid of any competitor and has always preferred to let her feet do the talking. It is what she should have done, he suggested, after Boldon’s initial social media post which blasted the NAAA for not selecting St Fort in their Commonwealth Games contingent.

“Michelle’s position should have been if [St Fort] is the future of track and field, then let her come out and show it and beat me,” Barton said, predicting that both St Fort and Boldon’s teenage charge, Jamaican sprinter Briana Williams, will be in contention for medals on the world stage before very long.

“Michelle should have been bigger than that,” said Barton, who also expressed his disappointment with Boldon for engaging in a public tit-for-tat with a national athlete.

But Barton explained that things have not gone swimmingly between himself and Ahye over the last few years. He cited a conversation they had had during last year’s World Championships in London, when he had offered Ahye a few tips and she was reluctant to take the information on board.

“The communication between us has not been as good as it should have been,” he said, noting that he has been careful not to do anything suggestive of a desire to override whatever instructions Ahye might have received from her overseas-based coach.

“[The foreign-based coaches] take our athletes after they are developed and make money while our local coaches continue to suffer,” Barton told Wired868, sounding resigned to accept the current track culture in which foreign coaches are almost instinctively given more respect than their local counterparts.

For Barton, respect is the issue at the centre of the Guardian’s front page story. It’s all the more intolerable as Ahye is the athlete who has in the past consistently clamoured for more support and respect for female track and field athletes.

The story came mere days after a High Court ruling declaring the country’s buggery laws unconstitutional had bolstered the local LGBTQI community in its fight for respect, fair treatment and eventual equality. The Guardian has since issued a public apology but Barton insisted that the story should not have been published in the first place.

He wants to see the media and the wider public consistently supporting the country’s athletes. And he wants to see the NAAA move now to put policies in place to ensure that Ahye—or any athlete for that matter!—does not repeat the Gold Coast relay pull-out, which most likely robbed the country of a podium place.

If all of that happens, he feels certain, the chances of achieving the TTOC’s Going for Gold 10×24 goal will be much improved.

Roneil Walcott is an avid sports fan and freelance reporter with a BA in Mass Communication from COSTAATT. Roneil is a former Harvard and St Mary's College cricketer who once had lofty aspirations of bringing joy to sport fans with the West Indies team. Now, his mission is to keep them on the edge of their seats with sharp commentary from off the playing field.
Previous Daly Bread: Minding the gap; why President Weekes is off to a commendable start
Next UN concerned by T&T’s “repatriation” of 82 Venezuelans, including asylum seekers 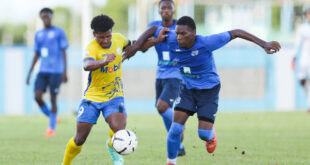 Phew!  The Secondary Schools Football League (SSFL) is back folks.  After a three-year hiatus, which …