“Professor Copeland’s [alleged] designation of Kambon as ‘persona non grata’ and his subsequent eviction for daring to make a contribution on the proposed renaming (was), in my opinion, a clear violation of (his) constitutional right to freedom of speech which, it has to be noted, is at the foundation of the University’s claim to intellectual freedom. […]

“Such behaviour is certainly unbecoming of a Pro Vice-Chancellor of The UWI.”

The following Letter to the Editor, which deals with the alleged eviction of CRFP’s Shabaka Kambon from a discussion at The UWI, was submitted to Wired868 by Marie Bermudez:

On Thursday 30th November, only a week after the last Beetham Gardens protests, which caused a major public outcry by some sectors of society, I was a witness to one of the most outrageous abuses of power on the St Augustine Campus of The University of the West Indies, the self-acclaimed leading institution of tertiary education in the region.

The event was the first in a series of public consultations to decide on a new name for Milner Hall, the UWI’s oldest hall of residence—which honours Viscount Milner, one of Britain’s most ruthless imperialists, whose genocidal policies affected millions of Africans, Indians and Arabs alike. The conveners of the meeting specifically invited UWI alumni to share their views; yet, when one alumnus, Shabaka Kambon, wished to speak and was duly recognized by the Chair of the meeting, he was prevented from making his contribution by Campus Principal Brian Copeland, who then forcefully ejected him from the meeting like a common criminal.

I feel compelled to write about this because, while the Beetham incident was fully ventilated in the media, the abuse of power at the centre of learning would have remained effectively hidden, if not for the outspokenness of the victim himself.

As an alumnus of The UWI, Kambon was legitimately present at the meeting. Even more importantly, he is the Director of the Cross Rhodes Freedom Project (CRFP), which, from as early as December last year, initiated the public education campaign about Viscount Milner, which included on-campus discussions on the name change. It was also the CRFP which passed on to the Principal the letter which initiated the entire process and informed his decision to have the issue debated by way of campus town hall meetings.

As Kambon was questioning the legitimacy of the ban, the Principal [allegedly] ordered the Campus Police to eject him from the room and escort him off the campus. Despite the fact that the Guild President, the deputy principal and other members of staff were present, the responsibility for demanding a reason for such drastic action fell upon two stunned female members of the audience.

The Principal then [allegedly] asserted that Kambon had assaulted a student, presenting no evidence beyond reference to a CRFP Facebook post from a meeting on Milner Hall. It featured a soundbite that to my mind merely exposed the colonial mentality of the Hall Chair. One of the women who continued to protest the example that Copeland was setting was also escorted out of the meeting by the campus police.

It ended with Kambon, as he was being led away by campus security, warning the Principal that he “would not be allowed to betray the people of the Caribbean.” I submit that the whole affair attests to specific incidents which are unbecoming of The UWI or any other institution of higher learning in this country.

Our campuses should remain sacred spaces for the free exchange of ideas. Professor Copeland’s [alleged] designation of Kambon as “persona non grata” and his subsequent eviction for daring to make a contribution on the proposed renaming as well as that of the female participant merely for questioning the Principal’s seemingly arbitrary decision were, in my opinion, a clear violation of the pair’s constitutional right to freedom of speech which, it has to be noted, is at the foundation of the University’s claim to intellectual freedom.

Secondly, the accusation against Kambon is arguably defamatory and possibly amounts to an assassination of his character. Such [alleged] behavior is certainly unbecoming of a Pro Vice-Chancellor of The UWI.

One might associate such authoritarianism with a North Korean or Chinese university but not with the Caribbean’s leading tertiary institution and it must be totally banished from the Institute of Critical Thinking, where the renaming consultation was taking place.

Want to share your thoughts with Wired868? Email us at editor@wired868.com. Please keep your letter between 300 to 600 words and be sure to read it over first for typos and punctuation. We don't publish anonymously unless there is a good reason, such as an obvious threat of harassment or job loss.
Previous Maraj’s murderous accounting of crime under this administration is in the liabilities column
Next We want a refund! TTSL asks referees’ body to foot the bill for boycotted games 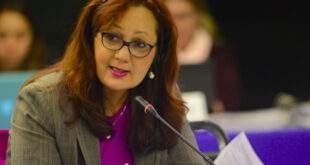