Twenty-eight year old batsman Darren Bravo burst to life tonight in Basseterre with a breathtaking 38 runs from 10 deliveries as the Trinbago Knight Riders copped a roller coaster affair with an eight wicket win that might have left St Kitts and Nevis Patriots captain Chris Gayle with a queasy stomach.

There were three stoppages for rain and one for a power outage—delays which added more than a little intrigue to a clash between the region’s top two T20 teams this season.

And, for much of the night, Gayle looked like the man to tame the conditions with a memorable 93 runs from 47 deliveries.

As the Duckworth Lewis method was applied, the Patriots’ innings was reduced from 20 to 13 overs. For Gayle, it was like waving a red flag.

The 10th over of the innings, bowled by TKR captain Dwayne “DJ” Bravo, went for 21 runs with two sixes and a four from Gayle.

“When Chris is on the go, especially at this venue, there is not much you can do,” said DJ Bravo, after the contest.

The Patriots plundered an eye-watering 67 runs from the last four overs while Gayle racked up 53 runs from the last 20 balls he faced. The giant Jamaican’s eventual total of 93 was the second highest individual score of the 2017 season and included eight sixes and five fours.

The final tally read 162/3 from 13 overs and the D/L method required TKR to put up 169 runs from as many overs to clinch the contest.

DJ Bravo, who won the toss earlier and inserted the Patriots, felt he had already identified the chink in his opponents’ armour: their bowling.

“We bat fairly deep,” said DJ Bravo, “so whatever they get, I [felt] we could chase it.”

By the time rain interrupted play in the fourth over of the second innings, the Knight Riders were 34 for two. Trinidadian spinner Samuel Badree had bowled Colin Munro for just one run with his last ball before the covers were introduced.

And, when play resumed, the Knight Riders were asked to chase 86 runs in six overs or, to be more precise, 52 runs from 17 balls.

In the middle now was the TKR captain’s younger brother, Darren, whose average with the bat this year is 17 and whose poor form prompted him to turn down a summons from the West Indies ODI team for England.

“I always know I am one good innings away from my best,” said Darren, who managed 27 on Sunday’s triumph against the Guyana Amazon Warriors.

If his compatriot, Badree, didn’t know as much beforehand, he was quickly made aware of that fact. His first delivery to the left handed batsman went for six runs. His second went even further and clean out of the stadium.

Smile gone, Badree had a word with Gayle. Bravo pulled the next ball for six as well. Basseterre had stopped bouncing.

The Knight Riders needed 33 runs from 12 balls. Gayle gave the penultimate over to Afghanistan off-break bowler, Mohammed Nabi; it went for 23 runs with one six from Bravo and two sixes and a four from Brendon McCullum.

“I think the pressure got to the Patriots,” said DJ Bravo. “The momentum was with us.”

The description did not do justice to the mayhem in the middle of the pitch. But then it was hard to put the scintillating swings of the younger Bravo’s bat to words.

When Barbados pacer Jonathan Carter began the final over for the Patriots, Darren had a strike rate of 325 and the cricket ball might have seemed as large as a volleyball to the elegant left-hander.

Carter only got to deliver two of the possible six balls. Darren smashed them both back over the bowler’s head for six.

“I’d like to dedicate [this knock] to my grandmom who is not doing very well right now,” said Darren, who was adjudged the man of the match.

Hopefully, granny will recover as swiftly as the Knight Riders did. Tonight, Gayle and company felt some of her pain.

Lasana Liburd is the managing director and chief editor at Wired868.com and a journalist with over 20 years experience at several Trinidad and Tobago and international publications including Play the Game, World Soccer, UK Guardian and the Trinidad Express.
@lasanaliburd
Previous Joevin allegedly goes AWOL from Seattle; TTFA can’t confirm involvement for Jamaica friendly
Next No permission for Joevin; but Warriors look to outgun Jamaica in POS tonight 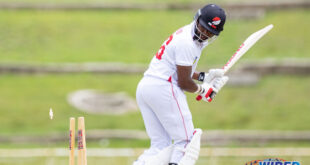 The Barbados Pride are now within touching distance of a second successive regional four-day title, …