Breaking News
Home / Volley / Global Football / ‘Yes, we can!’: Lawrence calls on T&T to believe in our Russia 2018 W/Cup chances

“We have to start believing as a nation that [World Cup qualification] can be done.”

Trinidad and Tobago head coach Dennis Lawrence does not look too much like the 44th US President. But after his team’s 1-0 victory over Panama at the Hasely Crawford Stadium on Friday evening, his message clearly resembled Barack Obama’s hugely successful campaign slogan, “Yes, we can!”

“Trinidad and Tobago came out and I saw a team that was willing to fight,” a satisfied Lawrence told the post-match media conference. “They tried to give the public something to say; these boys are here fighting for their country.”

Lawrence’s Panamanian counterpart, Hernán Gómez, was understandably rather less enthusiastic about the result and declined to attend the briefing.

Scores in the other Hex games on the night meant that, despite opening their 2018 World Cup Qualifying campaign account with the crucial win, T&T remain fifth on the table.

Mexico leapt to the top of the table after recording a 2-0 win over Costa Rica while the USA bounced back from opening round defeats to wallop Honduras 6-0 and move from last to fourth.

But nothing could dim Lawrence’s delight at the result and his team’s performance in what was his first competitive match at the helm. According to him, the players showed the type of hunger that he had been demanding of them.

Singled out for special mention with regard to showing hunger and spirit were the much maligned duo of Kenwyne Jones and Daneil Cyrus.

Jones, re-appointed captain prior to kick-off, was purposeful in his play and produced an enterprising performance that, one hopes, will have silenced his naysayers even if only temporarily. It certainly pleased his coach.

“The captain led by example,” he told the assembled media. “He gave me what I wanted from him.”

Lawrence continued, “I told him, you’ve been there and done it (and) he gave me every single thing he can. I’m quite happy.”

“We know what we need to do,” the lanky number nine responded indirectly to his critics in a post-match interview. “And I’m here to do my job and do what the game requires. Whatever the fans want to say, that’s up to them. Fans are fans.”

Cyrus did not have the opportunity to respond to the criticism levelled at him. But as far as Lawrence was concerned, he already had where it matters—on the field and in his favoured central defensive role. Time and again, he put his body on the line to smother shots on goal.

The road to the player’s redemption, Lawrence pointed out, is paved in the middle of the defence.

“He has done well,” the coach told the media. “I saw Cyrus as a young player and that’s the position I saw him playing. I thought he was a young, upcoming, good centre-back.”

The unavailability of regular central defenders Sheldon Bateau, Radanfah Abu Bakr and Carlyle Mitchell made it easier for Cyrus to get his chance. But Lawrence, a 2006 World Cup veteran, was careful to point out that the lanky defender was not yet on easy street.

“He has to keep his concentration going,” he noted, “not just today but all the way through.”

The combined efforts of Cyrus and his fellow defenders meant that custodian Jan-Michael Williams had an easier night between the sticks than has been the case of late. But Williams, a player with 76 full international caps, will know to expect things to be rather different in Tuesday’s World Cup qualifier against table-toppers Mexico.

Mexico’s Javier “Chicharito” Hernández opened the scoring against Costa Rica to pull alongside “El Tri” legend Jared Borghetti as the country’s all-time leading goal-scorer with 46 goals. But it was T&T’s own goal-scorer Kevin Molino who pushed his tally to 17 international goals from 36 appearances to capture the attention of the Mexican media as they look ahead to next week’s clash.

Lawrence offered a glowing review of his playmaker’s performance on the night but remained coy on the player’s fitness after he left the field on a stretcher late in the second half.

Molino was making his first appearance in the Hex after a two-match internal suspension for twice breaking the team’s curfew policy to attend a party.

In playful mood after the win, Lawrence had fun with the notion that his ace attacker may have been badly injured before he eventually conceded that the Minnesota United player had merely suffered from fatigue.

Experienced campaigner that he is, the rookie coach also knows that Mexico will be a horse of a different colour and he has already begun to turn his and the team’s attention to preparation for that now ultra-critical encounter.

“We can enjoy [tonight’s win] for maybe five minutes,” he announced, “because the focus goes immediately onto Mexico.”

“We have a short space of time to prepare for the game,” he warned, preaching to the choir. “The main thing at the moment for the players is recovery.”

Rookie coach but veteran footballer, Lawrence is clearly on top of his game, ticking all the boxes as he seeks to earn at least one more point from this two-match home interlude.

“I’ve managed to send somebody out to watch the Mexico game,” he alerted the gathering. “It was one of our coaches that works with the Football Association, (…) somebody that I trust. I sent him out there to watch the game and do a report.”

The revelation highlights an attention to detail that has to be a feature of the modern game—Wired868 understands that former local football legend, Russell Latapy, got the scouting assignment. But it also raises serious questions about the resources made available to one of Lawrence’s predecessors, Stephen Hart, who continuously petitioned for assistance that never came.

Lawrence’s technical staff dwarfs those of his immediate predecessor Tom Saintfiet and Hart and he has even had the benefit of introducing GPS fitness monitoring equipment to the players’ training regime.

“I think football has moved on,” Lawrence explained in the post-match session,  “and if we want to compete with the best, we need to be somewhere close to these people.”

For the moment, the people he’s concerned with being close to are Panama (third on four points) and the US (fourth on three). And if he can somehow conjure up another one point or three against the Mexicans on Tuesday, he will be one step closer to getting Trinidad and Tobago to believe that, as far as 2018 Russia World Cup qualification is possible, yes, we can!

Amiel Mohammed is a sports enthusiast and has worked in communications for Central FC and the Women's Premier League TT. He has also pioneered numerous projects geared towards creating opportunities for the differently abled such as the Differently-Abled Football Camp 2015 and Focus Football Coaching Academy.
Previous Lawrence’s Warriors over the moon? Best focuses on the Hasely Crawford Stadium crowd
Next St Louis gets armband as T&T start W/Cup drive with Venezuela friendly in Couva 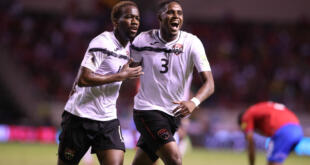 Gold Cup prelims: T&T pitted against Montserrat and either Cuba or French Guiana

Fifa suspension notwithstanding, Trinidad and Tobago must get past Montserrat and either Cuba or French …