“But these ‘island people’ did not. We stood…”

In the following Letter to the Editor, United TTFA member and technical committee chairman Keith Look Loy contextualises the local football body’s stance against autocratic global football juggernauts, Fifa, and its implementation of a normalisation committee in Trinidad and Tobago:

Justice Carol Gobin’s ruling is a victory for the national sovereignty of Trinidad  and Tobago, and the authority of the local judicial system over legal matters that arise within this jurisdiction.

It is an historic statement that the untrammelled and unchallenged rule of Fifa in local jurisdictions across the globe is a travesty of law and civilised governance. Fifa’s power is not infinite.

This ruling bears global significance and implications, therefore, and it is the most important development in international sports law and football governance in decades. Football people are watching—particularly in Africa, where Fifa has assumed control of the confederation itself, CAF, and where governments and football people are chafing under Fifa’s autocratic rule.

I was never in doubt regarding the outcome of this case because the preponderance of case law and precedent weighed in United TTFA’s favour. Indeed, as far back as 1991 the High Court ruled in my favour against the SSFL; in support of my right to resort to local courts to resolve a dispute despite TTFA/Fifa proscription of same.

This, therefore, is an unprecedented victory, but thoroughly logical and expected. It was possible, however, only because United TTFA was not cowed by Fifa arrogance and threat—an unprecedented response from a small association.

But these ‘island people’ did not. We stood.

When one observes recent developments in Switzerland involving the Fifa president, one understands the concern across the globe, inside and outside of football, that the manipulation of legal process and officials is endemic to Fifa’s legal and administrative culture.

The fact is, however, that United TTFA has only won the first half. There is a second half to be played, which will involve discussion of pre-United TTFA malpractice and Fifa’s role it.

I have always said this is the real reason behind the imposition of the normalisation committee: to cover up malpractice and to secure TTFA’s vote in Fifa’s global game.

Indeed, recent letters from high Fifa officials to the presidents of national associations across the globe—intended to rally support for embattled Gianni Infantino against criminal proceedings by the Swiss state—demonstrate the absolute necessity of securing his global voting bloc as protection against suspension by Fifa’s Ethics Committee.

United TTFA is ahead in a tough match against a ruthless opponent which has already indicated that if it ‘look like licks’ it will ‘mash up the match’.

In her wisdom, Justice Gobin challenged Fifa to avoid hypocrisy and live up to ‘the lofty objectives identified in Fifa statutes, and particularly Articles (3) and (4) of Fifa’s commitment to respecting internationally recognised human  rights, non-discrimination of any kind against a country for any reason and its commitment to promoting friendly relations in society for humanitarian objectives all of which are underpinned by an appreciation for the rule of law’.

Justice Gobin continued: “I do not expect Fifa to walk off the field or to take its ball and go home if after full ventilation of the issues, this court were to confirm the primacy of an Act of the Parliament of the Republic of Trinidad and Tobago over the Fifa Statutes.”

In other words, as a precautionary measure, she characterises any possible victimisation of TTFA as an issue of human rights and the rights of nation states.

United TTFA is prepared for the second half. We shall see how the habitual tough guy responds to such admonition from the referee.

And he is behind—not a position he is accustomed to being in.

Want to share your thoughts with Wired868? Email us at editor@wired868.com. Please keep your blog between 300 to 800 words and be sure to read it over first for typos and punctuation.
Previous Dear Editor: Does every creed and race ‘FIND an equal place’ or ‘FINDS’—it matters!
Next Dear editor: Don’t justify ‘cockroach’ slur, commissioner—it is a slippery slope 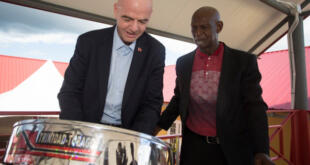 Dear editor: Pragmatism and self-respect don’t have to be mutually exclusive domains

“[…] I agree that in any fight one must be strategic in deciding where, when …