Knowing that his team simply cannot afford another slip-up, England captain Eoin Morgan called on his men to “front up for the next game.”

The last game was on Friday 21 June at Trent Bridge against Dimuth Karunaratne’s unfancied Sri Lankans. Here is how it, no, they, England, went down.

He curses his luck.

“Father!” he exclaims, preferring six-letter words, including whisky, when the pressure is on, “Please! Not an unholy repeat!

“You have to dust yourself off very quickly,” he had told his troops after Friday, preferring four-letter words this time, “and turn things around.”

They fronted up but did not turn things around.

Here is how, according to ESPNcricinfo’s live commentary, it—no, they, England—went down again on Tuesday.

Starc to Morgan, OUT, banged in short, Morgan climbs into the pull but that’s a top-edge! Cummins steadies himself inside the fine-leg rope, and this innings is in tatters now! The surprise bouncer reaps its rewards. England’s fabled depth is going to be tested once again!

Starc to Stokes, OUT, that is too good! It was going to take something outstanding to dislodge Stokes, and Starc serves it up with an impeccable off-stump yorker, tailing back in wickedly as it zeroed in on the base of the pole! He kicks his bat away in disgust, but he’s done everything he can to keep England alive …

They’re doomed! Six now down for 177. And despite Stokes’ 89, including eight fours and two sixes, Morgan’s men, chasing less than 300, fall short.

Lest we forget, England hosted the World Cup on three consecutive occasions in 1975, ’79 and ’83. And despite three World Cup finals appearances, they have no trophy to show.

In 2019, they were confident of making it fourth time lucky. And, except for a surprising loss against Safaraz Ahmed’s Pakistan on 3 June, things were looking good enough. Until that fateful Friday when things began to look brown.

After his team’s catastrophic loss to and elimination by Bangladesh in the group stages in the 2015 World Cup, captain Morgan decided that enough was enough.

In conjunction with former captain Andrew Strauss, Morgan has spent the last four years planning, attempting to ensure that the unglorious past remains the past. And the results have been so spectacular that, in 2019 alone, his team has, under his captaincy, racked up ten 300-plus scores, including three over 400.

So they were very confident that 2019 would be the year, the yeah! year. But first Sri Lanka transformed that Friday into a nay day. And now, Australia have raised the prospect of yet another four-year extension of their loooooooooooooooooooooong World Cup drought.

Hubris? Treating a top four place for his team as a given, in the Afghanistan game in Manchester, Morgan busied himself trying to influence the Indian and Australian selectors, whose teams they expected to also reach the semi-finals. He battered the hapless Afghans into apparent submission, striking 17 sixes and four fours in a blistering 77-ball 148 to post a massive 397 and push his side past them.

On eight points from five games, with an easy game against the struggling Sri Lankans next up, they looked good for ten points after six.

But, as we have seen, “easy” Sri Lanka turned out not to be easy after all. At the end of a tight, close-run thriller, only 20 runs separated the two teams, thought to be, on recent and current form, worlds apart.

And the victors, in easily the most unexpected result of this World Cup so far, were the Sri Lankan strugglers, arguably inspired by Morgan’s 18 June Christopher Columbus and Columbine-like massacre of Gulbadin Naib’s troops.

If Australia’s motivation was different, the result was the same. And England, now still on eight points after seven games, can potentially tally a maximum of 12. But they will have to play out of their skins to achieve that. Their two remaining games are against Virat Kohli’s India and Kane Williamson’s New Zealand. serious top four contenders.

Given current form and outstanding fixtures, India, despite just scraping past the resilient Afghans by the skin of their teeth last week, look likely to top the table with 17 points. They still have the now buoyant Sri Lankans to deal with. But, having already had one off-day, Kohli’s soldiers are unlikely to have another in quick succession.

Additionally, Kohli has a 2018 score to settle with England. And, not being the kind of man to leave unsettled scores unsettled for long, he is likely to relish a pitched battle against the Morgan-led side which now has a razor-thin margin for error.

The Kiwis tripped up against the unpredictable Pakistanis on Wednesday so they must beat Finch’s Australia to get to a safe 13 points—with the England result not in that reckoning.

Also on Australia’s plate are Faf du Plessis’ already eliminated South Africa. Victory in both their games means 16 points. But with their current 12, they have already qualified by virtue of their six wins.

Which leaves only Sri Lanka (6 pts from 6 games) and Bangladesh and Pakistan (7 from 7) in the mix.

But the key results are England’s. If they somehow contrive to not lose the next two games, their 12 points will more than likely suffice.

If, however, they cannot get the better of either India (Birmingham, 30 June) or New Zealand (Chester-le-Street, 3 July), catastrophe! Crapaud smoke deh pipe!

And there will certainly be many millions of Sri Lankans, Bangladeshis and Pakistanis —not to mention Afghans!—only too willing to supply the amphibian with endless quantities of tobacco.

Because, as the Twelfth Night playwright warns, the whirligig of time will bring in his revenges.

Earl Best taught cricket, French, football and Spanish at QRC for many years and has written consistently for the Tapia and the Trinidad and Tobago Review since the 1970's. He is also a former sports editor at the Trinidad Guardian and the Trinidad Express and is now a senior lecturer in Journalism at COSTAATT.
Previous Office of the President reveals guidelines for use of Weekes’ image without permission
Next Daly Bread: Blinkered view of crime; why Young’s ‘big fish’ talk fails to convince 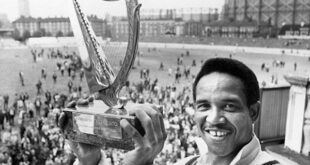