As is the norm in our Republic, when something outrageous happens, it is condemned only by whispers in cliques and in the chambers and domes of elites, except for a few brave souls who speak out.

And so it was with last week’s front page banner headline, “I am not a lesbian.” The grossness of it surpassed much of what repels many during the Carnival season, in the midst of which the headline appeared.

In this case, the closet whispers must have been immediate and loud because the newspaper delivered an editorial the day after the offending headline, skilfully trying to contain the damage.

Many of us were not fooled. The editorial ran as far away from the headline as a child runs screaming when a blue devil approaches. Despite the spin of the editorial, a beg pardon to the President-elect was necessary but none was forthcoming.

Also thanks to some forthright commentary, it is now acknowledged that formerly significant offerings of Carnival product have declined in quality but have been kept out of liquidation by policy-incoherent taxpayer subsidy.

Happily, as I pointed out last week, as a result of mainly youthful grapes of entrepreneurship, the Carnival product is evolving out of the regulatory chaos that has enveloped it.

Those who did not sneer when Trinidad All Stars—in which I have been a proud sailor—won Band of the Year and also those of us who did not dismiss the Socadrome as a threat now have the pleasure of observing the growing discussion about the evolution of the performing arts culture. This evolution looks set to embrace the old while ringing in the new.

I am confident that through this evolution we can regain the acclaim of ‘the Greatest Show on Earth’—provided, of course, the promotional agencies of the State adjust their insatiable desire for control and cease the accommodation of political satellites not acting in the best interest of the festival.

Two of the best examples of the evolution are 3Canal’s productions and Machel Monday. These events have moved to embrace all aspects of Carnival and are not one-band shows in which other performers are not allowed to shine.

In that connection, some readers may have read the detailed description of Machel Monday in the Express newspaper last Wednesday. It was reported that several rival soca stars shared the stage, ushered in and acknowledged by Montano, who is said to have introduced Aaron “Voice” St Louis, The Year for Love man, “to the loudest cheer of the night.”

I doubt that these introductions were made merely out of benevolence, as was claimed. Economic survival, as much as benevolence, dictates that the popular artistes of the season support each other and combine in the presentation of some high-quality events, at which a variety of acts are showcased at the same event.

On the ground, the steelband movement has long ago abandoned rivalry. Rival steel orchestras routinely guest perform in each other’s yards. I also heard recently of a boat cruise in which rival supporters join—some time ahead of the big night of the Panorama Final—for the purpose of “prepping their bands.”

Even more socially cohesive potential lies within the Junior Panorama. This is now my favourite Carnival event. Parents from all walks of life accompany their children who play in the various bands and there is an Intercol-type atmosphere, within which there is common purpose shared across traditional lines of class, creed and race. It is even suggested that there are junior bands that can contest successfully against some senior bands.

We can build on this during the rest of the year. The so-called prestige schools should move to invite their wrongly maligned less-prestige-school colleagues in pan to exchange performance visits in each other’s schools.

Children and parents alike will discover that the discord Mr Divider spreads among them—in order to seduce them into the tribal voting valleys—is not as real or as enduring as they are led to believe.

Let’s all tell Mr Divider, “Rock back. What we fighting for?”

Martin G Daly SC is a prominent attorney-at-law. He is a former Independent Senator and past president of the Law Association of Trinidad and Tobago. He is chairman of the Pat Bishop Foundation and a steelpan music enthusiast.
Previous TTPS: We’ve detained seven persons; investigation still live but we will keep you informed
Next “Swords are drawn and the venom is clear!” Shabazz talks women’s football and Pro League/Super League debate 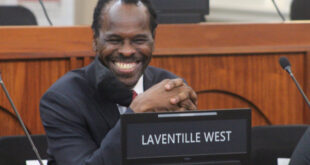