Best: What’s in a name? Calypso’s losing battle with the new identity normal

When Terri Lyons led Karene Asche and Heather Mac Intosh in a clean sweep for women in the National Calypso Monarch competition on Carnival Thursday, it may have reminded many of Denyse Plummer’s 1988 boast that woman is boss.

However, for those willing to go back two more years to the unforgettable 1986 season when David Rudder first set foot on the calypso stage, bringing ‘Bahia Girl’ and ‘The Hammer’ with him, gender might not have been the only item on the calypso agenda.

A clue: when Shadow left us on October 23, 2018 to be followed in early November by The Original De Fosto himself, i95.5fm’s John Wayne Benoit and John Gill invited Gypsy and Explainer to guest on their Saturday morning Barbershop programme the following weekend. Those who know why the radio pair may also have thought of adding St Vincent’s Winston Soso need no further clues.

For those who don’t know the reason, study the list of the placings of Thursday’s 12 finalists. What do all but #6 Chalkdust, #7 Gypsy and #9 Singing Sonia have in common?

A third and final clue is provided by a careful look at the personalities identified in the first two paragraphs. To know who four of the five calypsonians in paragraph two are, we’ll need to see birth certificates but we don’t for all five of those referred to in paragraph one, also calypsonians.

The naming business, more accurately, the business of using one’s name instead of a sobriquet, began, I think, with Rudder. Somebody—was it Terry Joseph or Keith Smith?—spotted the threat early and sought to kill that snake in the egg. Perhaps they scotched it but they certainly didn’t kill it.

Who can blame him? If you’re already a major entertainment personality and the calypso stage is merely the latest in your list of fields to conquer, would you add a ‘Mighty’ or a ‘Lord’ to your universally recognised moniker? Or would you adopt a completely new stage name merely to conform?

It seems fair to say that, whereas soca did not take more than a decade to become a free-for-all, the bastion of traditional calypso held firm for much longer. In 2001, Plummer was the first singer without a calypso sobriquet to win the title. Since 2010 when Kurt Allen, not yet the Last Badjohn in Calypso, became the third such singer to claim the throne, six of ten titles have gone the way of the wash-yuh-foot-and-jump-in-without-so-much-as-a-stage-name lot.

The 2020 Monarch, scion of Superblue and sister of Fay-Ann, has a defence to offer. By the time she first took to the calypso stage, the Lyons surname already meant something in the entertainment world. Additionally, both Mac Intosh—Heather, not Ronnie McIntosh, son of bandleader Art DeCoteau—and Asche, offspring of Llewellyn ‘Shortpants’ Mac Intosh and Errol Asche respectively, can safely use the Machel Montano alibi.

When he debuted in the Big Yard, the 9-year-old boy was not only considered much too young to soca but neither he nor his parents presumably had anything like a career in entertainment in mind.

Besides, who dares burden a pre-teen, even a gifted one, with a sobriquet?

Defending Monarch Ronaldo London also has a case, everyone able on the night to see the London bridge in the person of the #4, Brian.

Sonia Francis, who finished ninth, has followed tradition in merely prefixing ‘Singing’’ to her first name, as did Francine (Edwards) and Sandra (Des Vignes) before her. Francis might also have opted for ‘Lady’ (Lady Gypsy, Lady Iere) although Calypso’s most famous woman, Rose, chose neither, going for a name to make her association with the art form permanent. ‘Singing Linda,’ her given name, might have worked but ‘Singing McArtha’ or ‘Singing McCartha’ would certainly have had to grow on us.

Rose gets her better known name from the renowned American WWII general, Douglas MacArthur. War inspired several other well-known calypso names, many of them preceded by ‘Mighty;’ Bomber, Destroyer, Dictator, Executor, Fighter, Kitchener, Nelson, Power, Spitfire, Striker, Superior and Terror come readily to mind. Add ‘Stalin,’ ‘Sniper’ and arguably ‘Maestro’ came later. ‘Baron,’ ‘Duke,’ ‘Black Prince’ and ‘Hindu Prince’ of that era are a throwback to the many Lord this and King that who preceded them.

Calypso MC Tommy Joseph has acknowledged the tradition by making an occasional laughter-inducing appearance as Lord Put a Hand.

Today’s Trinidad Killa and Mr Killa echo the terror motif present in Atilla the Hun, Growling Tiger, Roaring Lion and Terror. We can speculate that it was Hollywood that inspired Caruso and Pretender and, later, Valentino. But it is clear that, with Melody and Sparrow, the emphasis shifted to a softer, more humane tone that targeted personal traits.

Today’s Lyrikal and Voice are the descendants of Caresser, Creole, Designer, Dougla, Explainer, Funny, Pink Panther, Poser, Relator, Scrunter, Shorty and Sugar Aloes to identify no more than a dozen.

But, as Thursday’s Finals line-up suggests, there are as many contemporary practitioners using their own names as there are using a sobriquet. Perhaps more.

So it’s worth remembering that, until King David’s 1986 arrival, before stepping on the calypso stage, every bard stepped out of his original skin and into his performing persona. And attire.

It’s Review opening night in the Arima Velodrome. The MC, competent enough but no Tommy or Sprangalang, introduces ‘Hollis Urban Lester Liverpool.’ The crowd reacts appreciatively, in anticipation of what Chalkie has in store for us this year.

Later, to bring the curtain down on the night’s proceedings, he introduces: ‘The defending International Soca Monarch Groovy Monarch.’ His name? ‘Swappi.’ His offering? Baron’s ‘Ah feeling it.’

Somewhere beneath the surface, 1998 Monarch, the Mystic Prowler, is most likely still moaning in pain. 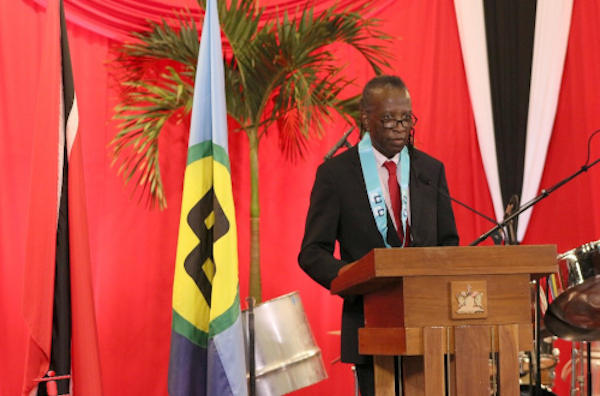 Earl Best taught cricket, French, football and Spanish at QRC for many years and has written consistently for the Tapia and the Trinidad and Tobago Review since the 1970's. He is also a former sports editor at the Trinidad Guardian and the Trinidad Express and is now a senior lecturer in Journalism at COSTAATT.
Previous Dumornay dominates as Haiti rout T&T 7-0, Look Loy explains decision to use reserve players
Next Demming: Thanks, but no thanks Mr Prime Minister; George St no place for Despers