‘Naps’, who now have 33 points from 13 games, will go into their final fixture against Queen’s Royal College, knowing that a solitary point will seal yet another Premier Division crown.

Only Naps’ fierce southern rivals, Presentation College (San Fernando), can stop them now. But that will take a near miracle. Presentation coach Shawn Cooper’s squad hit a major blip in their own quest to taste Premier Division success yet again with a 1-1 stalemate against Malick Secondary at Serpentine Road in St Clair.

Presentation are in third position with 27 points and still have two matches left to play. To secure an improbable Premier Division title, the ‘Pres Lions’ will need to win their two remaining games—one of which is against second-placed St Anthony’s College—and hope that QRC defeat Naps on the final game day.

Even the most adventurous of bookies would hesitate to play those odds. Naps last tasted defeat in the Premier Division back in 2017.

In Westmoorings, St Anthony’s (29 points) came from behind to defeat Carapichaima East Secondary by a 4-2 margin. However, the league’s leading goal scorers can only finish as high as second since the maximum points they can attain is 32.

Today’s matchup at Lewis Street, San Fernando did not quite generate the fanfare and raucous atmosphere of Wednesday’s derby clash between Naparima and Presentation, however, Eve’s charges still approached the game in a business-like manner.

Fresh from a 4-nil midweek thrashing of the free-scoring St Anthony’s, the boys from Bourg Mulatresse were brimming with confidence. The wily Eve was quite prepared for San Juan’s direct play and set-piece barrage, though, as Naparima made three changes from their intense midweek tussle and set up in an almost impenetrable 5-3-2 formation.

“For the most part, it worked. We kept a clean sheet and we got the desired result.”

You wouldn’t expect a team at the top of the league to adopt a counter-attacking style against sixth-placed visitors. However, today, Eve and Naparima abandoned a gung-ho approach for a more conservative one. It worked like a charm in the end too.

“Today it was all about the result,” Eve said. “And I think as coaches, sometimes we get caught up with playing the sexy football all the time. We were professional. We went out there with a job to do. We knew that if we got the three points that would put pressure on Presentation.”

The diminutive Ezekiel Kesar and National Under-15 standout Jesse Molik Khan started in place of the dependable duo of Isa Bramble and Nathaniel Perouse, and their fresh legs gave the Naps attack much impetus. In only the fourth minute, Kesar hit over bar from point-blank range at the end of a rapid counter-attack, where Khan and ace attacker Seon Shippley Jr combined sweetly.

In the 24th minute, the hosts showed glimpses of their slick play yet again. Khan brought a sharp save from goalkeeper Emmanuel John after collecting a sweet lofted pass from his elder brother, Shoaib.

Only two minutes later, the boys from Bourg saw their defence breached when centre half Elisha Garcia gifted possession to a tenacious Shippley Jr in the area. Garcia and John scrapped and scratched, trying to dispossess the Naparima attacker, but Shippley Jr kept his cool to bury into an empty net.

It was Garcia’s lone error, in what was an otherwise shrewd display from the lanky centre half. He was dominant in the air and strong in the tackle. But on a day when Naparima’s rear guard was quite stingy, Garcia’s attempt at a cheeky pass out of the back was magnified.

“I was disappointed with the way we started the game because I thought we started off really flat,” Moe said. “And then we conceded a goal from sloppiness, really.”

Naparima’s central defensive trio of Tyrike Andrews, Asukile Christopher and Thaj Neptune gave San Juan talisman and skipper, Renaldo Boyce, precious little time or space to work his magic in and around the penalty area. And clear-cut chances were few for the visitors.

When Andrews lost his footing—and possession of the ball—in the defensive third in the 45th minute, the Bourg Boys mustered a great look on goal. With the burly Andrews out of the play, San Juan attacker Daniel Best carved the defence open, finding flanker Christon Mitchell with a precise through pass.

Mitchell looked to be wheeling away in celebration as he sent his effort towards goal, but he was denied by a smart low save by opposing captain and custodian, Levi Fernandez.

Moe was pleased with the way his team started the second half, and they made a concerted effort to run at Naps’ left wing back Marvin Waldrop. The crosses were coming in thick and fast, as Isaiah Chase and Emmanuel Thomas searched for their skipper with vigour. It appeared San Juan had found a chink in Naparima’s powerful armour. However, they could not capitalise on that bright spell.

At the end of a flowing right side move in the 57th minute, Boyce broke his neck to get into the six-yard box as he flung himself at a low Chase delivery. However, with Fernandez well beaten, the rampaging Boyce could only kiss his effort off the bar and out of bounds.

It would be the best chance the visitors got all afternoon.

“I think the boys did well to come back in the game in the second half. I think we had a couple of clear cut chances and maybe if we had done better with those chances the game could’ve had a different outcome,” Moe said. “It’s just that today Naparima got the roll of the ball with the goal they scored. The difference was just that solitary moment.”

After absorbing San Juan’s brief spell of sustained pressure, Eve introduced Bramble, whose pace and tireless running has caused problems for many defences this season.

Less than a minute after his entry, Kesar, who outfoxed the defence with some nifty skill outside the area, found him, and Bramble had a chance to put the game to bed. After his hat-trick in Naps’ previous home game against Carapichaima, Bramble surprised many when he did not bulge the old onion bag.

Also surprising was the absence of Naparima attacker Ramdeen, the 2018 SSFL MVP. On Wednesday, Ramdeen came off the bench and almost settled the ‘South Clasico’ with a beautifully struck free kick. Today, the skilful flanker was an unused substitute.

It speaks volumes of the depth Eve and Naparima have in their locker room. And it also makes one think of the force the three-time Premier Division winners can yet become if Ramdeen is able to hit full straps in the National Intercol tournament.

“Mark had some injuries in pre-season and as a result, he didn’t get a proper pre-season so he’s not as match fit as he should be,” Eve said. “We don’t really like to force the players in a situation like that. But Mark will have a big part to play in this season because we are doing some practice games for him to get some match sharpness. And come Intercol time he’ll be a factor.”

In the 82nd minute, John could only wave and flap at a wicked long-range volley by Kesar, which left fans in awe as it crashed off the woodwork.

Tidy and purposeful in possession, Kesar often provided the link between Naparima’s midfield and their striking pair, and his understanding with the effervescent Shippley was seamless. The tidy Kesar certainly passed the rugged San Juan test, and so too did Khan (Molik) and Waldrop – eventually.

With Presentation failing to get the better of the enigmatic Malick outfit, Shippley’s goal has helped Naparima rest one hand on the 2019 Premier Division trophy and set them on the cusp of passing the ultimate test.

Meanwhile, in Maraval, Trinity College Moka’s fate was sealed; they were demoted to the Championship Division after falling 1-nil at the hands of rivals Trinity College East.

With Trinity Moka set to join the already-relegated St Mary’s College in the Championship Division next year, it is going to be an almighty battle to see which of the north teams will throw their hats back in the Premier Division ring for the 2021 season.

Looking ahead to the immediate future, though, and with their sponsorship woes now long forgotten, the Naps rhythm section can be heard priming up: “North, South, East, West. Naparima is the best!”

“This [consistency] is a testimony really. Remember we lose players every year, so this is a testimony to the work that the players and staff have been putting in,” Eve said. “The excellence of Naparima off the pitch is reflecting with performances on the pitch.”

QRC are on a bye

Malick Secondary are on a bye 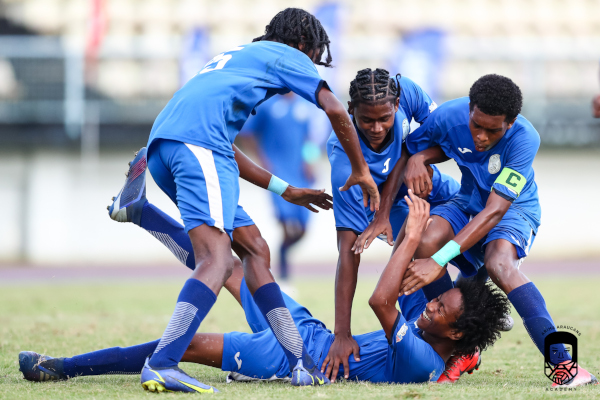 Roneil Walcott is an avid sports fan and freelance reporter with a BA in Mass Communication from COSTAATT. Roneil is a former Harvard and St Mary's College cricketer who once had lofty aspirations of bringing joy to sport fans with the West Indies team. Now, his mission is to keep them on the edge of their seats with sharp commentary from off the playing field.
Previous Noble: How TTPS raids in Arouca and Lady Chancellor differed; and what it says about our society
Next Daly Bread: Dante’s Inferno: Eggnog at St Ann’s, Bantu knots and Akiel Chambers