Reminiscent of tall, skillful and popular Swedish footballer Zlatan Ibrahimovic, Brent towers some 6’ 2” over me and the rest of his team mates.

At first impression, Sam renders a shy quiet personality, however once you begin to talk his language, football, he absolutely comes alive.

At 18 years, Sam’s football life is a busy one; he trains four times a week, approximately three hours per session, and currently plays for two teams, San Juan North Secondary School and the Trinidad and Tobago Under 20 National Team. He plays two games per week in the SSFL.

The following is an interview with “Sammy”—his nickname on the field—that helps us to get to know him better.

I was born in Mt Hope but grew up in Bourg Mulatresse.

I love macaroni pie and quite frankly, I eat too much but never put on weight.

Since you love to eat, can you cook?

Definitely handsome (blushes) and kind, but not with “outta timin” people.  “Outta timin” meaning people who step to me with stupid talk and stupid actions.

I want to play professional football.  At present I am on the Trinidad and Tobago Under 20 National Team; this was a very recent appointment, as I was on the Under 17 team before.  I want to move on to the Senior Team and then who knows where, maybe somewhere out of Trinidad.

Success would be for me to do just what I’m doing now.

Tell us a little more about your successes then.

For the Under 17 team I scored an important goal against Costa Rica in Panama; a free kick to win the game.  Costa Rica was eliminated because of me!  What is more success than that?!

With all these successes, I think it would be interesting to know what or who got you started with playing football?

Actually, I was not too interested in football at first but I have two uncles who are professional football players. (One uncle, Hector Sam, played professionally in Britain for eight years and now represents Police FC in the local Pro League) They are the ones who really encouraged me.

Once I started to take the game seriously, I realized that I real good and have real talent.  They would give me pointers on how to improve and well the rest is history.

Who was your most important coach(s) and why?

Mr (Keith) Jeffrey is my most important coach.  He always encourages and motivates me to do better and to improve.

I could not only play in my role as a forward but I can play all the positions on field, even in goal. I also have a lot of ball tricks.

Do you think your height has anything to do with your ability to play in any position?

Maybe, especially as a striker and in the goal.

Why is he your favourite player?

I follow his football closely and use some of his tricks on the field.  I really like the “Cristi Cut”.  This is a move that helps you beat players.

My favourite team is Manchester United of course!

My best football moment in the Premier League was my ‘hat trick’ in the game against Presentation College (San Fernando) and then I scored the winning two goals against Shiva Boys. Then when I was in the Under 17 National Team, in my first game against British Virgin Islands, I scored 7 goals! My worst time was the first four games of the 2014 Premier League.

What advice do you have for young persons like yourself who wants to pursue a career in football?

In these times there are a lot of opportunities out there.  You can begin to travel the world and learn so much about different countries and about different styles of football.  Keep training hard and always play your best on the field because you never know who is out there looking at you.

Tags 2014 Intercol Brent Sam One on one SSFL Wired868 profile

Candis Cayona is a certified Events Planner and Administrator, a Bachelor of Arts in Mass Communications student at COSTAATT, and a wife and a mother. Cayona believes in always being open to learning because it inspires growth.
Previous FIFA flouted own principles in TTFA election delay
Next TTFA explains record women’s ticket prices for historic W/Cup contest 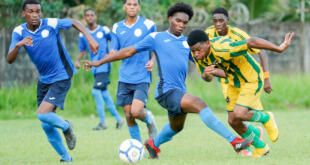