There was a time when I would have laughed it off. But the moment the story of Chris Gayle’s latest ‘I ain’t leaving’ tweet came up in my feed, I went to YouTube to listen to Andre Tanker.

Smokey Joe play a big-time mas./Purple velvet and shining brass./He went to town on a golden throne,/King of the road in a world of his own.

Some jokes, you see, are still funny the umpteenth time you hear them; the one about Gayle’s endless retirements and unretirements is emphatically not among them.

Someone has to tell the self-styled Universe Boss that the world is probably laughing not just at him but at us. All of us.

A 7 November Wisden story with an Aadya Sharma by-line carries this headline: ‘Recalling all the times you thought Chris Gayle was retiring (but he didn’t)’:

‘[W]e’re still waiting to see where it goes from here,’ writes Sharma, in wrapping up, ‘Gayle’s official retirement could come in a few hours from the time I write this, a few days, maybe months, or never. The element of surprise is long gone, and it’s even crossing all lengths of graceful inevitability.’

Were he on social media, he would surely have added LOL. With or without it, his message is as clear as day: this crap has gone on waaaaaaaaaaay too long.

The piece lists six different dates when the issue of the hard-hitting opening batsman’s retirement was on the front burner, put there either by him or by officialdom. The one everyone remembers, of course, is the one involving WICB chief cad Dave Cameron during the 2015 World Cup.

“Gayle goes,” tweeted the disgrace for a president, re-posting a disgruntled fan’s statement. “Can’t buy a run. Let’s give him a retirement package… Can’t fail repeatedly and still front up based on reputation.”.

Cameron is now—properly!—on the dung heap of West Indies cricket; Gayle continues to play the game—in both senses!

Unembarrassed by the ignominy of a failed final fling in the 2021 World Cup where his five innings yielded a total of 45 runs with a highest score of 15, the long-serving, 42-year-old, left-handed former West Indies captain has once again reiterated his resolve not to call time on his international career just yet.

As if the multitudinous post-World Cup laments about the pathetic performance of Kieron Pollard’s team had unanimously pleaded for his not to call it a day, he last week reassured us all that he ‘ain’t leaving’

As if the entire WI team had not come together to applaud him as he made his way out into the middle to open the batting against Australia on 6 November in what everyone knew was his final 2021 T20 World Cup game.

As if, after his unsatisfactory nine-ball 15, he had not saluted the crowd inside the stadium in Abu Dhabi in that farewell way as he trudged off to join his disappointed team-mates in the dressing room.

As if, after the game, he had not joined Dwayne Bravo in taking the guard of honour salute offered by Aaron Finch’s Australians.

Well, the truth is that if anyone is guilty of having an overactive imagination, that someone is Gayle himself. Listen to him talking in the immediate aftermath of the 8-wkt cutarse with which Pollard’s side signed off their World Cup appearance:

“I didn’t announce any retirement but [if] they actually give me one game in Jamaica to go in front of my home crowd, then I can say ‘hey guys, thank you so much’.”

Would that the problem were as simple as an overactive imagination. Forget the anti-Ambrose tirade for a second; there is also all of this from essentially the same speech: “I’m a very determined person. I work hard. A lot of people don’t see the hard work but I work hard in silence. I’m a talent and I use it wisely.”

It gets curiouser and curiouser.

“I grew up from nothing to something. I didn’t have anything; I didn’t have the luxury when I was growing up so I used those things to motivate me as well. Start my career.

“‘Mum, I’ll get you a house when I make the first money. I’ll buy a car.’ Those are the things that keep you going. With the stability and the mental strength I have, that carried me right through 20-odd years of playing for the West Indies and playing around the world as well.”

As a keen observer of sport and sportsmen in general and West Indies cricket in particular, with no clinical training in psychology, no illusions about possessing expertise in the relevant area and no pretensions about having any such qualifications, I say without fear of successful contradiction that those 118 words do not speak merely to an overactive imagination.

The problem, I wager, goes much deeper.

“At no time I felt like I’ll actually reach the bar, that I’m bigger or better than anyone else. I was very humble with it as well. I just give thanks to the Almighty to actually be standing here telling you all these things.”

Gayle obviously has not done so but you should. Ask yourself why the Universe Boss was standing there telling the world these things.

My answer? A disease. Limelightis. Arguably the bane of outstanding sportsmen, chief among them boxers, it has made many of them unretire inopportunely—to their cost! It might arguably be the raison d’être of golf’s Champions Tour.

But, as Tanker shows us very clearly, it is not just a sport thing. Is there, mutandis mutandum, any essential difference between between the Universe Boss and Smokey Joe?

“Who are we to tell the great Chris Gayle how he should leave?” Sharma’s piece ends. “All said, the manner of his departure shouldn’t change the way we remember him. He’s been a great and he’ll always be.”

So, President Skerritt, your declared policy is to leave the cricket issues to the cricket people. But this is obviously not just cricket; this thing goes well beyond the boundary. To you falls the task of speaking directly to those deep-seated insecurities on which limelightis feeds.

Reassure Mr Gayle on our behalf that the lofty pedestal to which he has elevated himself over the course of his achievement-studded, 20-plus-year career is as solid as they come.

The manner of his departure will not change the way we remember him.

Earl Best taught cricket, French, football and Spanish at QRC for many years and has written consistently for the Tapia and the Trinidad and Tobago Review since the 1970's. He is also a former sports editor at the Trinidad Guardian and the Trinidad Express and is now a senior lecturer in Journalism at COSTAATT.
Previous ‘We’ve been doing our homework!’ Kenwyne adds 9 new players to T&T squad for Dom Rep friendlies
Next Fair ticket and souvenir prices and thoughtful scheduling; how to maximise Cricket W/Cups 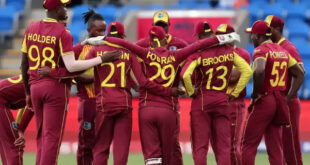