“We’re going back to where we were!” Deyalsingh re-introduces ban on ‘recreational sport’

The Trinidad and Tobago Government has re-introduced Covid-19 restrictions on ‘recreational sport’, with the immediate result that all sporting activity—outside of the training of national teams—will be illegal from Friday 2 April 2021.

Minister of Health Terrence Deyalsingh, in a virtual press conference today, said the change was due to rising cases of the novel coronavirus in general as well as, in particular, the ‘dangerous’ congregation prompted by sport.

“What we have noticed is persons engaged in sports, is it is more than 22 people,” said Deyalsingh, “[and] the after-game lime is becoming dangerous, where food and drink starts to come out and people are congregating without mask wearing.

Sport was the only industry affected today as Covid-19 measures related to other industries remain unchanged. The government had relaxed restrictions on sport on 20 February.

Deyalsingh stressed that the sport ‘roll-back’ will not extend to national teams, who can continue preparing for international tournaments. However, the inability for domestic teams to train and play will obviously reduce the potential match fitness of players on national teams, like the Soca Warriors.

The government also appears unwilling to differentiate between unstructured ‘sweating’ by casual enthusiasts and training by clubs and school teams.

The Covid-19 pandemic, which started in March 2020, already struck an entire year off the local sporting calendar.

Domestic football usually starts around Easter with competitions like the Republic Bank National Youth League and the Youth Pro League, while the Ascension League—which includes Pro League and Super League teams—and the Commissioner’s Cup youth tournament were gearing for kickoff.

Deyalsingh’s announcement, which did not offer a timeline, will be a blow to the respective organisers.

However, Deyalsingh, who was accompanied by chief medical officer Dr Roshan Parasram, insisted that the measure was necessary to keep the country safe. Both men pointed to inter-county spread of the virus, which started gathering steam in Caroni and Victoria and is now on the move in the east-west corridor.

“We are concerned about this high spread: 40s, 30s, 20s per day—numbers we have not seen since last year,” said Deyalsingh. “[…] If we extrapolate those numbers into the future, the situation is going to become untenable. Cases are going to mount into the hundreds, deaths will increase, […] our hospitalisation numbers will begin to rise again.

“[…] As of tomorrow that freedom we had to participate in recreational sport, unfortunately we must roll back…”

Deyalsingh did not say when this decision will be revisited and warned that the impending ‘vaccination roll-out’ will not impact on the ban on sport.

“Vaccination is not a silver bullet, it is just one very important extra layer of protection,” he said. “[…] We seem to have decreased our vigilance, we seem to be thinking we have beaten the virus. We have not.”

Neither Deyalsingh nor Dr Parasram pointed to specific cases of infections linked to recreational sport; but that will not matter now. The health minister instead noted three Covid-19 deaths yesterday and said today’s move is aimed at preventing further loss of life due to the virus.

Lasana Liburd is the managing director and chief editor at Wired868.com and a journalist with over 20 years experience at several Trinidad and Tobago and international publications including Play the Game, World Soccer, UK Guardian and the Trinidad Express.
@lasanaliburd
Previous Martin: T&T had improved possession, but insufficient penetration and indisciplined defence
Next Dear Editor: Malls packed, beaches crowded, new movies in cinema; yet they pick on sports 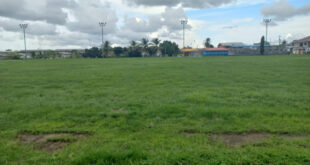 “[…] What we see happening did not erupt over night. This is a result of …