Live Wire looks on as US Embassy tries to re-write ‘live history’, after Capitol calamity

Enraged by election results that did not go his way, outgoing United States president Donald Trump incited—indirectly or not—thousands of supporters to storm Capitol Hill yesterday to…

Well, the aim of yesterday’s remarkable actions remain a bit hazy. Sort of like a dog furiously chasing a car. Even if the driver panicked and abandoned the vehicle, how is the pooch gonna drive anyway? And, more importantly, what does the pothound have to bribe Licensing Office with?

But back to America’s own political mongrel. Thus far, the ‘siege of Capitol Hill’ has claimed four fatalities, including 14-year US air force veteran Ashli Babbitt, who previously survived four foreign military tours. Babbitt was reportedly shot as she and other rioters tried to break through a barricaded door in the building.

Her last Twitter message read: ‘Nothing will stop us… they can try and try and try but the storm is here and it is descending upon DC in less than 24 hours… dark to light!’

Babbitt’s final excursion, mind you, was carried out for the benefit of a president who once referred to fallen soldiers as ‘losers’ and ‘suckers’. Jim Jones and David Koresh would have nodded in approval.

United States Ambassador Joseph Mondello tried to trump that dark and tragic irony today, as he claimed the takeaway from yesterday’s events—which was referred to as ‘unrest’ in one excerpt and ‘horrific’ in another—was that Joe Biden and Kamala Harris were still sworn in to replace the helm of his own administration.

“It shows our determination to get democracy right and to achieve a more perfect union,” stated Mondello. “It shows our resolve to display the true essence of who we are as Americans. We know that our democracy has been tested in the past, and it will be tested in the future. Nevertheless, we should not be defined by these moments.

“Instead, we should be defined by how we bounce back.”

The ability to re-write history, even as it is still unfolding, is indeed quintessentially American. It is how one gets away with illegally squatting on land for 400 years, while you chuck the original inhabitants in the basement—eh, reservations—and avoid payment to your migrant labourers with all the brass of former TTFA president David John-Williams.

Maybe one day, students will learn that Trump was such a fan of the democratic process that he just would not stop looking for votes—even months after the election. Naturally then, his supporters were desperate to get inside Capitol Building to help with the count.

Just like Adolf Hitler was actually a dog lover who enjoyed large, well-coordinated, ‘open-minded’ groups, parades, and was very keen on Europe. And Covid-19 was a little love bug that enjoyed travel and meeting new people, and was more than a tad touchy-feely.

America will not be defined by yesterday’s Capitol calamity, anymore than Trump will be defined by last November’s election results. Only, eh…

To besides, shhh… Don’t tell them.

Mr. Live Wire is an avid news reader who translates media reports for persons who can handle the truth. And satire. Unlike Jack Nicholson, he rarely yells.
Previous Ambassador Mondello: US democracy ‘should not be defined by these moments’
Next Dr Browne: T&T will not vote in OAS motions on Venezuela 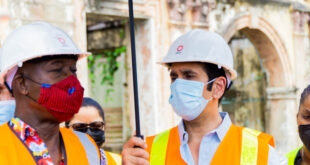 Missing the Faris for the trees? Mr Live Wire gets another political lecture from a mysterious man

(Scene: A dapper gentleman examines a humble lodging with notable admiration.) FAR: I love the …