The Tacarigua Presbyterian Primary School became the second school to be shut down today after contact tracing led to another SEA student.

Dr Naresh Nandram, principal medical officer of the Ministry of Health Epidemiology Division, confirmed at today’s virtual press conference that the measure was taken after a 43 year old male from Arouca presented at the Arima District Health facility and was confirmed to be Covid-19 positive.

The patient shared a household with eight persons, who were three adult males, three adult females and two children—one of whom was a SEA student.

“We have been in contact with the principal at the [Tacarigua Presbyterian school] and advised that the school be closed,” said Dr Nandram, “and we are in the process of contact tracing the school and the families.”

Last week, the Maraval RC Primary School was shut down after a SEA student there tested positive for Covid-19. In the latest case, the Tacarigua student was swabbed this morning but results are still pending.

The Arouca patient, who is the country’s 148th confirmed case for the novel coronavirus, was a delivery driver—and he continued to work despite feeling ill.

“The individual was symptomatic for six days,” said Dr Nandram. “During those six days, contrary to the public health guidance that we have given over and over again, this individual did not stay home.

“What ended up happening was this individual went to work; and we are in the process of testing everyone at work that he was in contact with. He was a delivery driver and there are several other companies that we have contacted…”

Trinidad and Tobago has had four positive cases with no obvious travel history within the past week and a half. Minister of Health Terrence Deyalsingh said it is too soon to say whether the country was experiencing a second wave. Instead, he described it as ‘an upward tick’.

“We have to be careful how we describe things as waves and peaks,” said Deyalsingh. “We need to get more information from contact tracing to determine if it is a second wave or peak… We have seen an upward tick but this may not represent a peak at this point in time.”

Dr Avery Hinds, the technical director of the Epidemiology Division, described the recent cases as ‘a sporadic occurrence of local cases’ and said the Ministry of Health is acting as quickly as possible to ‘prevent local spread’. It was, he explained, too soon to make a determination on the source of the ‘upward tick’—be it from illegal immigrants or otherwise.

“At the present time, we are seeing local sporadic cases and we are actively investigating,” said Dr Hinds. “[…] I do not have sufficient information to identify a source.”

Any reclassification of Trinidad and Tobago’s Covid-19 cases from ‘sporadic’, said Deyalsingh, will come with an official pronouncement from the World Health Organization (WHO).

“Whilst we focus on identifying the cause, we must also focus on the population to follow the simple health measures we have given,” said Deyalsingh. “[…] Wear masks; stay home if you are ill; isolate yourself; and get tested.”

“Assume, one, that you have Covid,” he said, “and assume everyone around you has Covid…”

Dr Hinds suggested that persons should not be hung up on the geographic locations where cases are springing up, as Trinidad and Tobago is too small and well-connected for the virus to be restricted to one town.

“It is a false sense of security to focus on the area from which a case arises, knowing how mobile our population is,” said Dr Hinds. “A case anywhere in Trinidad, means contacts everywhere in Trinidad.”

“This recommendation is based on the advice of the minister of health and the chief medical officer,” stated a release from SSFL general secretary Azaad Khan.

Deyalsingh quoted from a CNN report which suggested that ‘the cure for Covid, outside of a vaccine, is trust’.

“We have to trust each other to do the right thing,” said Deyalsingh, who also asked the public to trust ‘the government’s repatriation policy [and] testing policy’. “We have to continue to trust and show solidarity with the institutions that are leading the fight.” 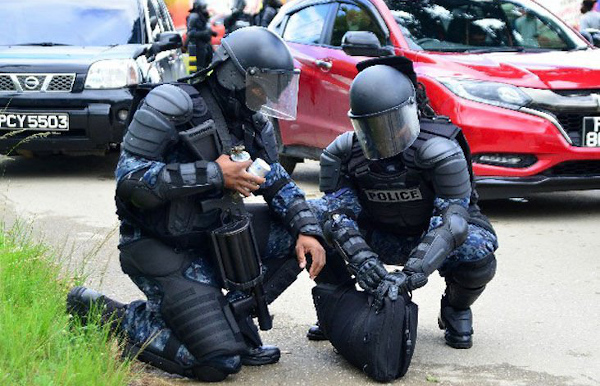 Lasana Liburd is the managing director and chief editor at Wired868.com and a journalist with over 20 years experience at several Trinidad and Tobago and international publications including Play the Game, World Soccer, UK Guardian and the Trinidad Express.
@lasanaliburd
Previous Colleen Holder: My dad, ‘Mac’, and other media workers never fully recovered after 27 July 1990
Next Griffith probes party at Five Islands Water Park, slams ‘hypocrisy’ of Deyalsingh and CMO