No donation is too small! T&T U-20 defender Derron John puts career on hold to save infant son

“I’ll help anyone who is in need or in any type of challenging or non-challenging situation; I would give to the world if I can,” said former Trinidad and Tobago National Under-20 Team defender and St Anthony’s College student Derron John. “Anything to help, I’ll be there once I am reached out to.”

At present, John is the one who needs help. Or, to be more precise, his son, Israel John, is in urgent need of goodwill.

Israel was born on 3 May 2019 to John and his partner, Jenesis Scoon, and his parents’ joy quickly turned to shock.

“We found out about Israel’s health some hours after he was born,” John told Wired868. “The doctors found his breathing was strange. They took him and performed some tests, and that is when they discovered the left side of his heart was not developed.”

John had just gotten home—after witnessing Israel’s birth—when he got the bad news by telephone and was advised to return to the hospital as soon as possible. Israel has since been diagnosed with Hypoplastic Left Heart Syndrome. At present, his condition is stable but the situation is precarious unless he has an urgent heart surgery.

According to research by the Centre for Disease Control (CDC) and Standford’s Children Health Organization, Hypoplastic Left Heart Syndrome (HLHS) is a birth defect that affects normal blood flow through the heart. As the baby develops during pregnancy, the left side of the heart does not form correctly which means the infant cannot pump enough oxygen-rich blood to meet the body’s needs.

Infants with hypoplastic left heart syndrome do not live long without surgical intervention.

John, who is appealing to the public for support, shared his family’s plight with Wired868:

How did you find out about baby Israel’s health issue?

We found out some hours after he was born. The doctors found his breathing was strange. They took him and performed some tests, and that is when they discovered the left side of his heart was not developed. I had already left the hospital and was at home sleeping when I got the call to return to the hospital [because something is wrong].

How did you cope with such devastating news?

At that moment, I did not know what to feel; it was such a surreal experience. My son [was] just brought into the world and within only a few hours we got the news that he was fighting for his life [that] he had not even began to live yet. It was so unreal.

Even if I were on the other side of the situation and not experiencing the bad news, I would have still been so sympathetic to this situation. It is hard, such a big blow to share to any new parents.

What does baby Israel need?

Israel needs a series of three heart surgeries which would be equivalent to approximately one million US dollars. The first step begins with a hospital’s acceptance to complete the surgery, which is only possible if we were accepted for financial aid by the Children’s Life Fund or if we accumulate the funds by other means. If the first step is successful, the first operation can be completed. We would then have a waiting process of six months for the second operation, and then the third operation followed in two years.

What has the response been from the Children’s Life Fund programme?

Well the CLF basically deals with three hospitals that they have spoken to us about. One is located in the Cayman Islands and the two others are located in the US. Unfortunately all three hospitals declined the operation because they found that the case was too risky and we were not approved any grants from the CLF.

For me, there has not been any type of success thus far. Even if we miraculously receive acceptance by another hospital, it still has to go through the CLF board for funding acceptance, which can still be declined by the CLF. It is like a double blow; you can find a hospital that approves the operation but still not be accepted for funding, which will bring us back to square one.

Are you pursuing other alternatives to raise funds for the operation?

Our family recently held a BBQ on May 24th and 25th to raise funds for baby Israel’s surgery. We also have other means of receiving funding for baby Israel. We started a Go Fund Me Page (GoFundMe/Baby Israel) which is shared on all our social media pages and donations can be made by hand by contacting me at 701-5358 or Jenesis at 312-1185.

We also opened a bank account at First Citizens to collect money for the operations. The account number is 2592878.

Thus far, the support has been great. Our family have been doing everything in their power to raise funds for baby Israel’s surgery.

What is the emotional state of you and your partner?

We are coping the best we can and are trying to remain strong for each other. We are taking it one day at a time. There is definitely a feeling of anxiety because it is an open heart surgery on a baby [and this would be] very risky, even for an adult.

Has this crisis affected your football career?

At the moment, I have put my career on hold until this challenge I am facing is resolved. My son is everything to me, so I have placed him before any and everything.

However, once we get a hold of this situation I intend to start back training.

What do you consider your achievements to date as a player and what is your focus when you do resume training?

Honestly, my son has been my greatest achievement. Career-wise I would say it was making the National [Under-20] Team for three consecutive tours.

[…] My main focus when I restart is to join the Defence Force and play for their football team. I have always wanted to play for Defence Force, ever since I was six years old. You can say that is my ultimate goal, once I can get a hold of this situation.

With respect to the donation to baby Israel, I just want to highlight that it does not matter what amount is given; we are accepting it. A little goes a long way, even if it is 25 cents! We are exploring any and every avenue to save baby Israel’s Life.

Editor’s Note: Anyone wishing to donate in aid of baby Israel’s heart surgery can make payments to the following:

Giselle Cumberbatch is a COSTATT student pursuing an Associates degree in Applied Science in Journalism and Public Relations. She is an adventurer and enthusiast, who is always on the hunt for new experiences and ways to improve her life.
Previous TTPS: Marcano fell asleep at wheel; fatal crash happened five minutes from home
Next Suzanne Mills: Has Newsday’s ghastly crime coverage—pioneered by my mom—helped or hindered fight against crime? 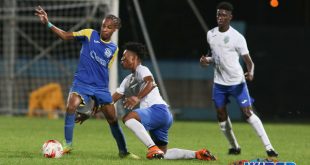