Stop Trinis from joining ‘Jihad?’ Raffique Shah says charter a plane for them!

I cannot understand the national outrage over the video posted on the Internet that shows several Trinidadian Islamic “jihadists” somewhere in Syria, dressed in combat gear, firing rifles on what appears to be a range, and inviting their Muslim brethren to join them in holy battle in “Hijra”, wherever that paradise or hellhole may be.

I’m serious when I say we should not only be happy that those men (and their many wives and children) are thousands of miles away from our country, but we should encourage others who believe in the nonsense they do to answer their call to arms.

If I had the power to so do, I would invite ISIS to send an “ambassador plenty-potentially” here to issue whatever visas they need to facilitate their journey into the netherworld. I would sponsor one-way tickets for all jihadists and their families, wish them speedy deaths, and let them know they will not return to this cussed land of their birth if they survive.

For those who think I am mad, let me paint an alternative scenario: would you prefer that these misfits remain in Trinidad, acquire weapons (no big deal) and go around shooting protective services’ officers, people of other faiths, or even their Muslim brethren they see as being infidels?

We have more murderers than we can cope with, so why not export as many as we can to countries or zones that welcome such “talent”?

I would even run some CAL charter flights to help speed up the process.

Imagine one fool saying that the reason he fled Trinidad was because he was not free to practice his religion. I was stunned, listening to him.

If anything, we have too much religious freedom here, and now we add freeness to the trough.

I repeat a statement of fact that many people may find unpalatable: on a per capita basis, or per square kilometre, however you want to measure it, Trinidad and Tobago has the highest density of persons who claim to be clerics in a thousand faiths or more.

More than any other country on earth, we have a surfeit of bishops, high priests, deacons, ministers, brahmins, pundits, gurus, imams, muftis, hajis, mullahs—and now jihadists.

Any quack can open a “church”, declare a “religion”, elevate himself or herself to ranks hitherto unheard of, and before you know it they are recognised by government, seek subventions from the State, and clamour for public holidays.

Now, add freeness to the boundless freedoms that religions enjoy.

Successive governments have been complicit in this scam. Religious organisations demand and receive State funding for festivals, something that should never happen in a secular State—which is what we are according to the Constitution.

Last week, Government granted millions to Hindu organisations for Divali. Sat Maharaj and the Maha Sabha got the lion’s share ($2 million). In doling out our dwindling dollars, the line minister reminded Christian groups of the deadline for submitting requests—or demands?—for funding of Christmas festivities. And a few months ago, Muslim organisations and mosques received generous grants for Eid from the previous regime.

I don’t know of any other secular State in the world that allows the religious freedoms we permit and the freeness we encourage.

Gone are the days when the faithful of whatever persuasion, and communities of varying faiths, contributed towards communal celebrations of each others’ festivities. Such collaborations fostered self-reliance and tolerance, and made communities across the country close-knit, hence better and safer.

Today, everyone is content with feeding at the public trough—politicians, priests, parents and children.

But back to the jihadist fools who could not practise Islam here the way they wanted, hence their migration to “Hijra.”

Think about it: if there are another thousand families like theirs who are uncomfortable in the land of freedoms and freeness, would we not be better off facilitating their migration?

Look at it this way: besides the money we dole out in the name of God (for religious purposes, or so they say) and Mammon (millions paid for nudity and revelry at Carnival), why not a few million more to get rid of elements who, if they remain here, are sure to get involved in heinous crimes?

Beheadings and the dismembering of victims of crime, which is a culturally unacceptable way of murdering people (shoot the man, nah!), and which is rearing its ugly head here (pardon the pun), is routine in Saudi Arabia, the headquarters of Islam.

We may well find opening a desk to facilitate flights to “Hijra” will bring us more benefits than wasting money trying to find out who wants to join ISIS, and preventing them from so doing.

Think about it, General Dillon.

Raffique Shah is a columnist for over three decades, founder of the T&T International Marathon, co-founder of the ULF with Basdeo Panday and George Weekes, a former sugar cane farmers union leader and an ex-Siparia MP. He trained at the UK’s Royal Military Academy Sandhurst and was arrested, court-martialled, sentenced and eventually freed on appeal after leading 300 troops in a mutiny at Teteron Barracks during the Black Power revolution of 1970.
Previous Is the Lotto part of Scam-lamafia? Best looks at $30m jackpot
Next Rats, revenge and recycling: Daly looks at UNC’s internal elections 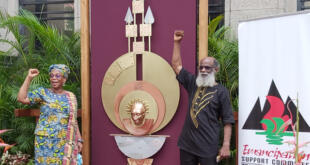